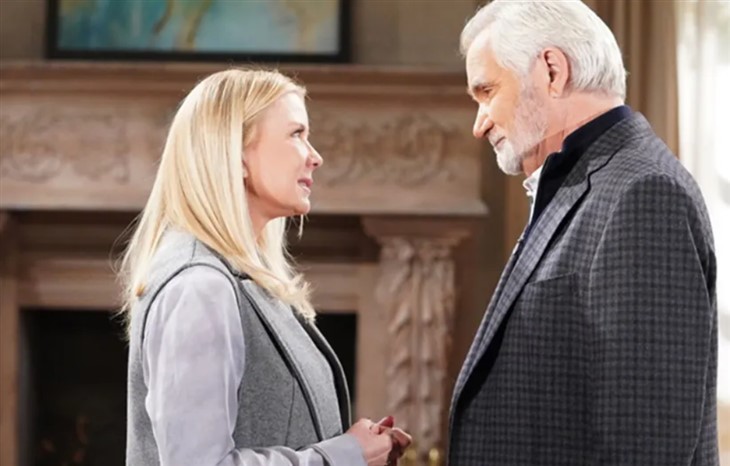 The Bold and the Beautiful (B&B) spoilers document that Brooke Logan Forrester (Katherine Kelly Lang) rededicated herself to restoration. The epic dream she experienced, which paid tribute to B&B’s thirty-fifth-anniversary celebration, serves as motivation.

Talks with Eric Forrester (John McCook) during the dream sequence and waking hours motivated Brooke to go for it. So, she returned to Forrester Creations, where Lang’s character has sporadically appeared over many months and spoke with the love of her life.

Brooke dropped her defeatist attitude, openly stating to Ridge that she does not want a divorce and was wrong to let him go. However, that turnabout is not decisive at this point in the developing storyline.

The Bold And The Beautiful Spoilers – Ridge Forrester Concerned About Logan

Ridge Forrester (Thorsten Kaye) is being honest when he tells Brooke that he will always love her. She knows that his love for her is stronger and deeper than he has for any other woman on the planet, including Taylor Hayes (Krista Allen).

Brooke has not heard Ridge compare her directly, in specific terms to Taylor. But Lang’s character knows that whatever he felt and still feels for Taylor does not match their connection.

Ridge is concerned with Brooke’s overall well-being because he believes she felt an impulse to drink. That assessment will shift when Sheila Carter’s (Kimberlin Brown) secret is exposed. But when will that be?

Not much time has passed since Ridge decided that he needed to leave the mansion and move into the cliff house’s guest room. He and Taylor have become closer. But they have not recommitted to each other, as Allen’s character told Thomas Forrester (Matthew Atkinson).

Without a reunion, Ridge remains open to reconciling with Brooke as long as they learn about Sheila’s horrible New Year’s Eve trick. But said reunion becomes harder to realize, or does not happen if Ridge and Taylor reconcile.

Will TPTB enable a quick reveal of Sheila’s actions, or will Brown’s character engineer indefinite silence?

Longtime fans of B&B and crossover fans from The Young and the Restless know that Sheila can never be underestimated. That soapy awareness means that Brooke likely does not control her immediate future.

Days Of Our Lives Spoilers: Ciara Tricked And Trapped, Will The Devil Win?