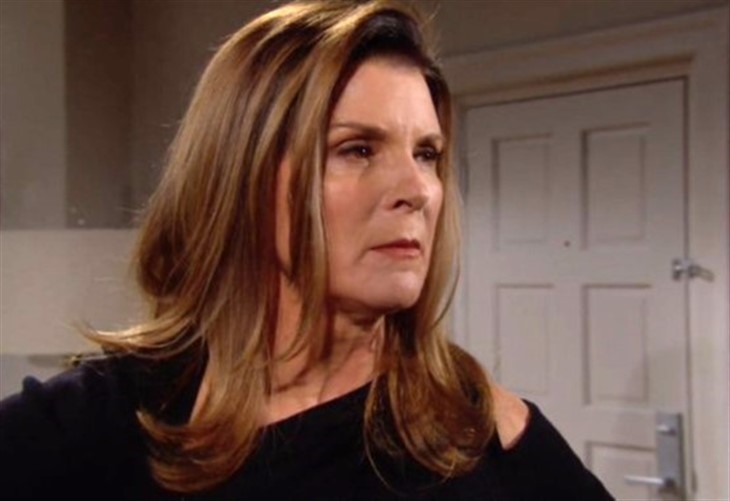 The Bold and the Beautiful (B&B) spoilers document that Sheila Carter (Kimberlin Brown) has been revealed as her son’s killer and daughter-in-law’s shooter. Steffy Forrester Finnegan (Jacqueline MacInnes Wood) deserves full credit for forcing herself to recall what happened on that horrible night at Il Giardino.

The immediate aftermath of Sheila being unmasked is closure. At least Steffy and her family know the identity of the villain who killed John Finn Finnegan (Tanner Novlan).

But peace of mind does not project ahead, as all things Sheila have never gone quietly into the night of daytime.

A recent episode of the internet-based series, Bold Live, implied that one or both of Ted King (Jack Finnegan) and Naomi Matsuda (Li Finnegan) were recording scenes in mid-May. B&B’s supervising producer, Casey Kasprzyk, interviewed Brown, King, and Matsuda, at points simultaneously, which provided a wink to episodes that will be seen in approximately mid-June, due to advanced filming schedules.

While Li did arrive at the hospital after her son was seemingly pronounced dead, Jack has been conspicuous by his absence. He and Li may have separated after the reveal where Jack admitted Finn was the biological child he had with Sheila. However, the absence of King’s character has not made sense in the weeks that have passed since Finn’s murder.

Steffy’s physical recovery seems to be going okay. Her release from the hospital and ability to return to the cliff house underscores that the bullet Sheila put in her did not create overly serious damage.

Psychologically, Steffy’s road to recovery remains harder. Her initial inability to recall that Finn and Hayes Forrester Finnegan (Samantha Worden and Piper Harriet) existed did not last long. As Taylor Hayes (Krista Allen) said, her daughter’s mind processing the horror as best it could.

Confirming that Sheila was the shooter should allow Steffy’s mind to settle. However, getting her from the cliff house into custody is purely step two in what could be a complicated, soapy process.

The Bold And The Beautiful Spoilers – What Comes Next On B&B?

Sheila is teased to be arrested by Deputy Chief Bradley Baker (Dan Martin). She will be put in prison, with buzz about Brooke Logan Forrester (Katherine Kelly Lang) being among those who will lambaste her while imprisoned.

But will Sheila remain confined or escape? If she makes it through to a trial, will a proper conviction result, or might one of daytime’s most epic villains wiggle out of justice?

Also, a follow-up scene, where Finn condemns his birth mother’s actions, would seem more likely than not on B&B.