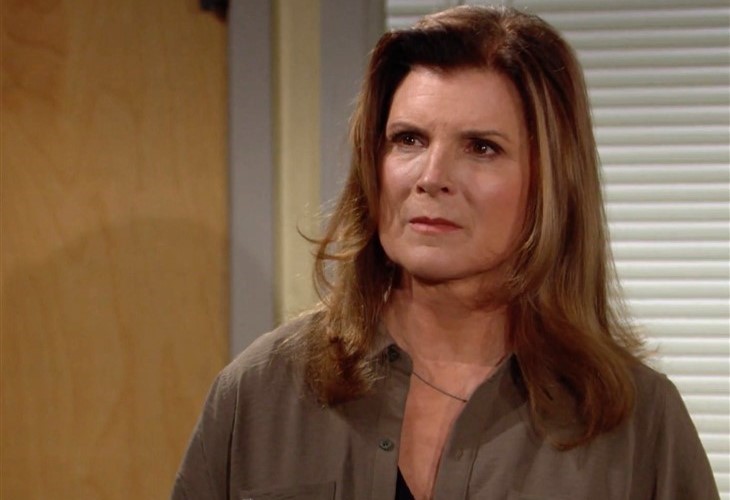 The Bold and the Beautiful (B&B) spoilers document that Sheila Carter (Kimberlin Brown) could not restrain herself any longer. Ridge Forrester’s (Thorsten Kaye) condemnation of Sheila, specifically when he called her an animal, created the surprise reveal.

Sheila’s stunning admission of guilt means that she is going to jail. She allowed herself to become provoked into abandoning what might have been a winning hand.

Brown’s character could have claimed innocence. No matter how guilty she looked and with only Steffy Forrester Finnegan’s (Jacqueline MacInnes Wood) recent memory issues, it was plausible to believe Sheila may have beat the rap.

The Bold And The Beautiful Spoilers – Villain Behind Bars In LA

Ridge said something that soap fans believe. Sheila does not get punished. If so, she would have still been in jail for all the crimes she committed in past years.

B&B fans know that Sheila’s rap sheet in Los Angeles, California is long. But crossover fans of The Young and the Restless also know that her dark history is just as bad in Genoa City, Wisconsin.

Sheila is projected to go from the scene of her admission at the cliff house to a jail cell, courtesy of Deputy Chief Bradley Baker (Dan Martin).

Steffy called Sheila evil. That is not an opinion, though a skilled attorney working on Sheila’s behalf might argue as such.

Only a psychopath would blame her daughter-in-law, who Sheila shot after shooting and killing John Finn Finnegan (Tanner Novlan). But that is what Sheila did.

Viewers have seen Sheila tell herself and Deacon Sharpe (Sean Kanan) that Steffy was to blame for all that happened. That means Sheila believes Steffy provoked her, so any response from words to the shots is not her fault.

Sheila is saying that her background and current makeup does not translate to free will existing within her. She is a robot who reacts based on the actions of others.

Sure, Sheila can withhold her emotions at certain points in the plot, like the two separate occasions where Steffy hauled off and slapped her hard across the face. But Sheila is fully convinced that Steffy is wrong in not having forgiven what she cleanses as poor choices.

Anyone who believes that kidnappings, shootings, killings, and other events reflected poor choices should not live on the outside world. So, viewers will be watching to see the justice system locks Sheila up and never lets her out or allows her to escape on B&B.