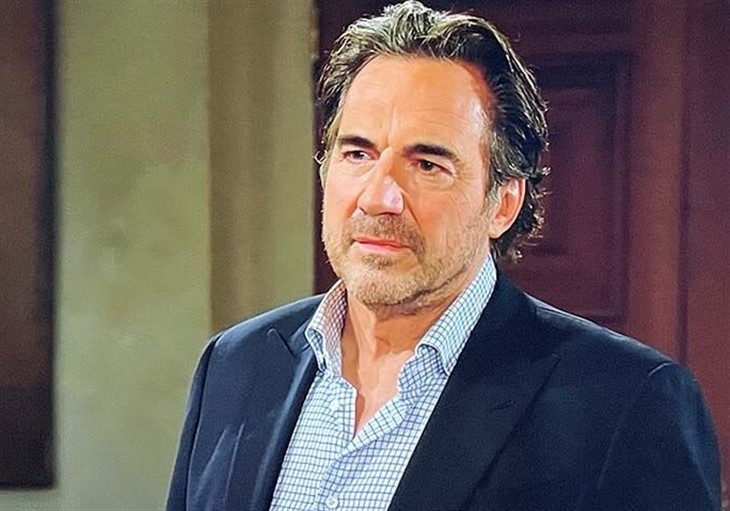 The Bold and The Beautiful spoilers for the next two weeks, May 16-27 tease there will be secrets revealed and shocks coming on BOLD!

Ridge Forrester (Thorsten Kaye) will be supportive as he tells a shocked Brooke Forrester (Katherine Kelly Lang) how she fell off the wagon on New Year’s Eve. He’ll tell her it is more like she was pushed off the wagon – by a scheming Sheila Carter, (Kimberlin Brown) who swapped the labels! Brooke will be grateful to know what really happened, because she’s been beating herself over why she wanted to drink!

That still won’t put her in the clear totally with Ridge, however, because Sheila didn’t lock Brooke in the bedroom with Deacon Sharpe (Sean Kanan)! That was all on Brooke, whether she was drunk at the time or not – Ridge likely still doesn’t believe that nothing happened!

BOLD Spoilers – Ridge Forrester Will Be Torn, But Won’t Reconcile

Ridge always has had compassion for Brooke’s fall from sobriety, and even went with her to her Alcoholics Anonymous meeting. That is, until he found out Deacon spent the night – perhaps if Brooke had admitted everything right away things would have been different! Realizing Sheila was a big part of what happened that night, he will have more compassion for Brooke, and a little torn between her and Taylor Hayes (Krista Allen).

But he will do something that will put him in more neutral space-he’ll move into the Forrester mansion instead of staying in Steffy Forrester Finnegan’s (Jacqueline Macinnes Wood) guesthouse. That will give him a chance to sort out his feelings about the two of them, both of who he has loved dearly and has children with.

The Bold And The Beautiful Spoilers – Sheila Carter Is Arrested

As for Sheila, she’s already realized that she’s been set up in the cruelest way possible – by Taylor inviting her to the cliff house to visit their mutual grandchild! Sheila spilled all the tea she was so upset and felt so betrayed, and what’s worse, Deputy Chief Bradley Baker (Dan Martin) heard it all! He comes out, an unpleasant surprise indeed, and Sheila is actually shocked-she’ll of course vow revenge and maybe think about an entrapment defense.

She’ll be dragged off to jail kicking and screaming by two deputies as Deputy Chief Baker watches. Steffy will probably also be watching and gloating that her plan worked so well!

BOLD Spoilers – Taylor Hayes Worries As Her Daughter Supports Her

Naturally, Taylor will worry about losing Ridge to Brooke when he moves to the Forrester mansion, closer to her rival of so many years – when Ridge waffled back and forth! Steffy will support her and advise her even though it is an obvious case of role reversal of mother and daughter! Before Ridge actually makes the move away from the guesthouse on Steffy’s property, she’ll speak her mind, and she’ll speak her heart as well! As hard as Steffy and her brother Thomas Forrester (Matthew Atkinson) have worked on that parent trap they’re not about to give up now!

While Liam Spencer (Scott Clifton) has tried to support his wife, Hope Spencer (Annika Noelle) as well as Steffy, the other Spencers have been MIA – until now. Wyatt Spencer (Darin Brooks) will make an appearance just in time to see their father Dollar Bill Spencer (Don Diamont) trash Ridge for disloyalty to Brooke! He will have his doubts about Ridge’s love for Brooke and feel like she can do better -but that could cause Ridge to think he’s trying to move in!

That could make Ridge feel like he’s got competition for Brooke from Bill and Deacon. But he’ll still be torn between Brooke and Taylor!

BOLD Spoilers – The Forresters Band Together In The Midst Of Crisis

Even though soon Quinn Forrester (Rena Sofer) will realize she’s got an Eric Forrester (John McCook) marriage crisis, the two will band together to support the rest of the family. Steffy will finally let herself truly mourn her late husband John “Finn” Finnegan (Tanner Novlan) and the future Sheila robbed from them. Thomas will also have a crisis of sorts as he’s forced to admit to his father just how much he really knew about Sheila’s secrets and for how long! Needless to say, Thomas is overwhelmed with guilt, believing if anyone was in danger it would have been him! Ridge will realize that Sheila was threatening Thomas and he was doing the best he could under the circumstances; and Sheila will have a fraught jailhouse visit from Brooke!

During the week of May 23, Ridge and Taylor will feel it’s best that they decide to keep something a secret. This could be about Thomas being forced to keep Sheila’s secrets, because the last thing he needs is for her to mess things up for him from behind bars! One interesting development is that Li Finnegan (Naomi Matsuda) also shows back up, to talk to Steffy about Finn; no memorial service or funeral has been spoken of yet.

One would think there would have already been a funeral but maybe not – and maybe there’s a reason! Steffy, in the meantime will still be grieving and Liam will continue his support, but Hope won’t like it!