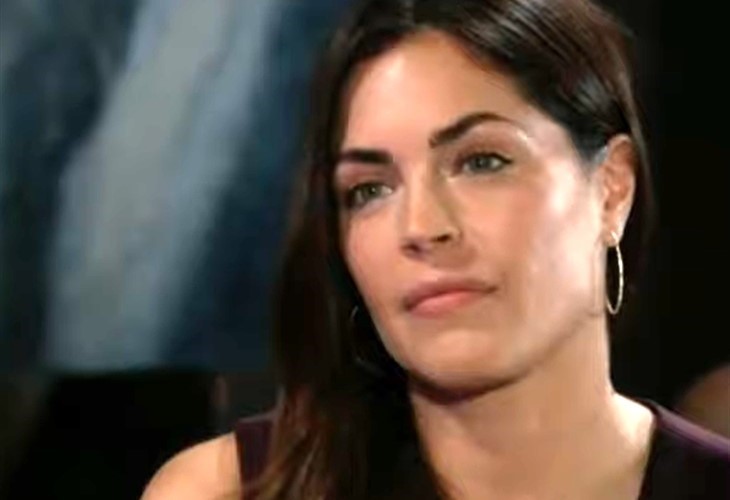 General Hospital (GH) spoilers and updates reveals Britt Westbourne’s (Kelly Thiebaud) love life has been lacking since Jason Morgan’s (ex-Steve Burton) presumed death. Britt has joined a dating website but has had no luck with matches. Will Britt find her soulmate at a pool party?

General Hospital’s Britt has proved to be unlucky in love. Britt asked Jason to go with her to find her mother on Cassadine Island. Since Jason was killed on this trip, Britt blames herself. Jason didn’t just go because of Liesl Obrecht (Kathleen Gati), he wanted to find his brother Drew Cain (Cameron Matheson) as well. Spencer Cassadine (Nicholas Chavez) hit home when he told Britt how bad she was at relationships as she tried to help him. Spencer’s comments were cruel and cutting. Does Britt believe what Spencer says is true? Is Britt worried that her Huntington’s Disease diagnosis may put an end to any romance that could be left in her life?

The pool party at the Metrocourt will begin on May 27th when General Hospital’s Britt attends the Society Setups party. Of course, Brad Cooper (Parry Shen) will be in attendance as well. Josh Kelly’s new character is set to appear soon and he could possibly be a new love interest for Britt. Not much is known about the character yet but hopefully, some details will be released soon. Any character that Britt is matched up with will certainly have some big shoes to fill. Jason is a hard act for anyone to follow and Britt was quite smitten with Port Charles’ resident bad boy. Will this new guy pique Britt’s interest?

General Hospital Spoilers – Will Josh Kelly’s Character’s Past Cause Problems?

General Hospital’s Britt and the new character will spend a lot of time together. However, it seems that Kelly’s character could be tied to Dante Falconeri’s (Dominic Zamprogna) past as well. Will Dante warn Britt away from this new man? Britt doesn’t heed anyone’s warning very well, after all, she was warned against Jason too. Britt is used to leaving a life that includes danger. Both of Britt’s parents have been international criminals. Could Kelly’s character be any more dangerous than her family?

If Kelly’s character is tied to Dante’s past, could he also have ties to Britt and Cesar Faison (Ex-Anders Hove? What obstacles will Britt and her new guy face as the relationship moves forward? Is Britt truly ready to give another man a shot at her heart?

Days Of Our Lives Spoilers: Bo Brady Returns To Salem