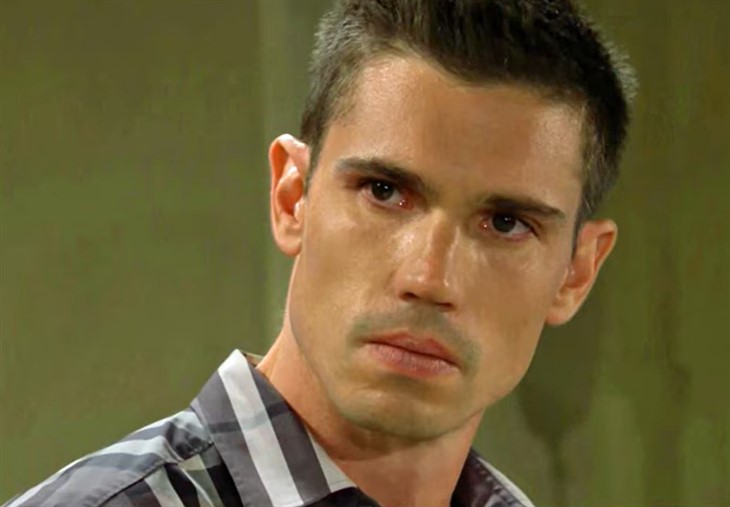 The Bold and the Beautiful spoilers for the week of March 21 reveal that John “Finn” Finnegan (Tanner Novlan) pays an unexpected visit to his biological mother. Finn will give Sheila Carter (Kimberlin Brown) an opportunity to earn redemption. However, will Sheila blow it, and what happens when the truth about her champagne scheme gets out?

The Bold And The Beautiful Spoilers – Steffy Forrester Finnegan’s Suspicion

However, Steffy has already noticed Thomas seems to be defending Brooke all of a sudden. Steffy can’t get Thomas to open up about what’s going on. So, she will be determined to find out the truth. Steffy does see Sheila and Thomas in a heated conversation, but from a distance. So, it’s likely that Steffy doesn’t hear what is being said.

During the week of March 21, Finn will pay Sheila a visit. Even though Sheila is desperate to be part of Finn and Hayes Forrester Finnegan’s (Piper Harriot) lives, Steffy isn’t on board. Sheila was able to spend a few hours with “SINN” and the kids on Christmas Eve. Since then, Sheila’s barely interacted with them.

Finn will come up with an idea on how Sheila can earn redemption. However, Finn also doesn’t know about Sheila’s scheme to destroy Brooke’s life.

The Bold And The Beautiful Spoilers – Sheila Carter’s Dilemma

The Bold and the Beautiful spoilers reveal that Sheila will be thrilled about the chance to earn a place in Finn’s daily life. However, she is also going to be put in a tough position. Sheila can’t tell Finn what she did to Brooke. Finn has a strong moral compass and that could destroy everything. So, this makes it even more important for Sheila to make sure the truth never gets out.

However, everyone is going to find out that Sheila set up Brooke to relapse. Not only will that paint Brooke as the victim, but it will destroy Sheila’s claim that she’s changed.

Finn will be mortified that Sheila intentionally caused Brooke to relapse. Finn supported Steffy Forrester Finnegan (Jacqueline MacInnes Wood) during her addiction recovery. Plus, as a doctor, Finn might not be able to forgive his mother for such a heinous act.

Steffy on the other hand just might side with Sheila. It seems that Steffy is turning bad and is determined to reunite “Tridge,” even at the cost of someone’s life. This could be what finally breaks up Finn and Steffy for good.