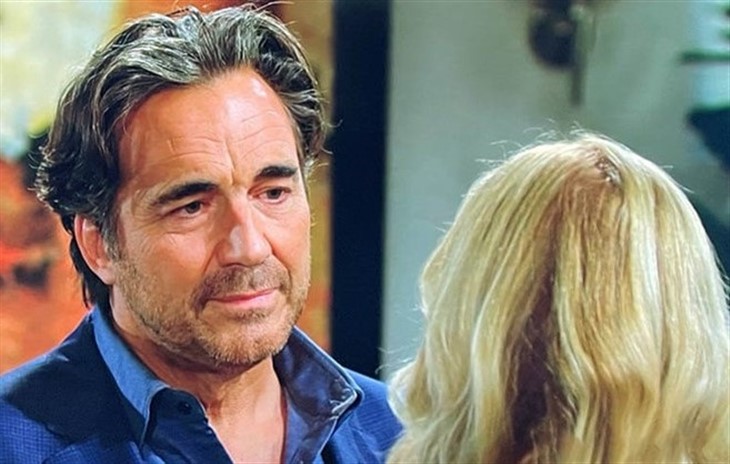 The Bold and the Beautiful (B&B) spoilers document that Ridge Forrester (Thorsten Kaye) is conflicted. He remains worried about his wife because he knows that her sobriety break has lasting implications.

Brooke Logan Forrester (Katherine Kelly Lang) has been hard on herself. She, like Ridge, does not know that she has been overly analytical because the drinking issue represented sabotage.

Meanwhile, at Sheila Carter’s (Kimberlin Brown) hotel suite, Thomas Forrester (Matthew Atkinson) was irate. Brooke is not his favorite person, but he is not happy that Sheila switched labels on bottles of champagne.

The Bold And The Beautiful Spoilers – Ridge Forrester Falls In Between

Ridge shifted his rage to Deacon Sharpe (Sean Kanan), using him as a proxy for the anger he felt toward Brooke. Brooke’s betrayal happened under the mystifying influence of alcohol, which complicates Ridge’s evaluation process.

While he moved out of the Logan mansion, Ridge has not made a hard break from Brooke. He is not mad at her but more disappointed and sad.

The dilemma in this breakup scenario involves Ridge’s lack of desire to move on, combined with his feelings of wanting to break from a pattern that has negatively affected this couple for decades.

It was rather surprising that Sheila gave Thomas the answer he wanted without offering a threatening counter. B&B’s arguably greatest of all-time villain bowed to Thomas’ request, telling him how she orchestrated Brooke’s drinking.

Thomas said that he would tell his dad what Sheila did if she did not describe what happened that resulted in Brooke drinking alcohol. Sheila took that to mean her tell to him would result in Thomas keeping the secret.

The Bold And The Beautiful Spoilers – Brooke Logan Forrester Allowed To Dangle Indefinitely?

It would seem that Brooke is going to lose Ridge to Taylor Hayes (Krista Allen) through a slow-drip process. Ridge is living on the cliff house property where Taylor currently resides. Their children and two of their grandchildren are there as well. Thomas did not make any hard promises. Whatever Sheila believes represents hope.

It would be a watershed moment in Thomas’ transformation process if he relays to Brooke, Ridge, and Taylor what Sheila admitted. The result might be that Ridge and Brooke remain married, but maybe not.

No certain answers are expected immediately. Drama involving these legacy characters should coincide with the show’s thirty-fifth anniversary arriving later this month.