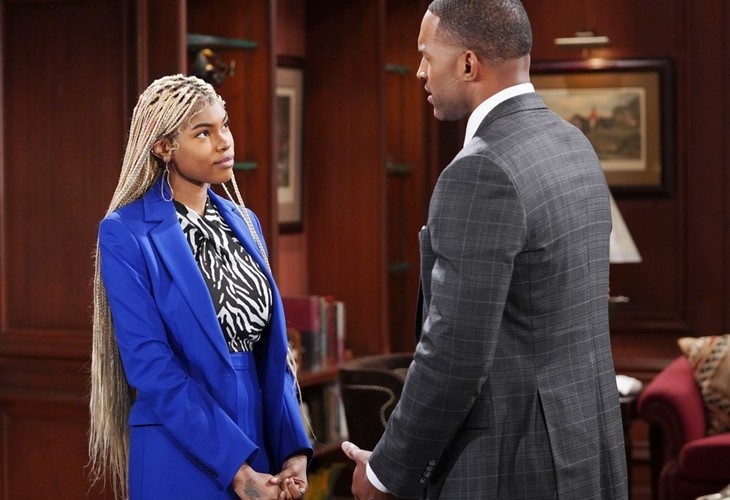 The Bold and the Beautiful spoilers document that Carter Walton (Lawrence Saint-Victor) does not love Paris Buckingham (Diamond White). But teasers indicate that he will make what could be his arguable third romantic mistake in a row.

Devoted viewers know that Carter convinced himself that Zoe Buckingham (Kiara Barnes) was his great love. Their connection happened quickly and came at a time in Carter’s life when he was alone. Their breakup happened because he learned that Zoe was more interested in Zende Forrester Dominguez (Delon de Metz) than him.

The Bold And The Beautiful Spoilers – Paris Buckingham Is In Love

Paris seemed to be in like with Zende. Her memorable ask of him to accompany her to Dodger Stadium, where she sang a wonderful rendition of the National Anthem, implied that love was in the air.

This couple deepened its relationship in recent months, but then Carter caught Paris’ eye and appeared to touch her heart. The age difference between Carter and Zende, with de Metz’ character being closer in age to Paris, seems to have played into the desired couple’s switch preference on some level as well.

Intriguingly, Paris has not been pushed off by Carter’s admission that their feelings do not match.

Along with Paris’ mother, Zende and Quinn do not feel that Paris and Carter are a good match. Zende’s position is based on his hopes. As for Quinn, her assessment is more measured.

Quinn feels she and Carter have a deep connection. Her experience, along with Graces’, should not be discounted. But Paris is too love-struck to consider logical arguments.

The Bold And The Beautiful Spoilers – What Is Carter Walton Thinking?

If Carter opts to rekindle his connection with Paris, he will do so against the advice of the woman he has come to love. Quinn’s perspective is one that Carter has come to trust.

Viewers know that Quinn and likely everyone else will become aware of Eric and Donna Logan’s (Jennifer Gareis) cavort. It will become possible that numerous pairings shift or completely change when that happens.

Whatever Carter and Paris’ teased marriage plans may be will be tested if Quinn is available.