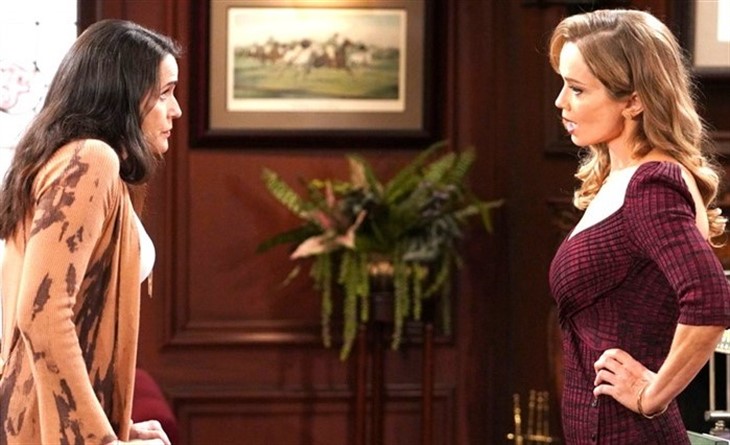 The Bold and the Beautiful (B&B) spoilers document that Donna Logan (Jennifer Gareis) wants to fully reconcile with Eric Forrester (John McCook). She was thrilled that he wanted to continue to restart their romantic connection but wants more.

Quinn Fuller (Rena Sofer) has no idea that her husband is not playing pickleball. Instead, he is cavorting with a woman who did not betray his trust in Carter Walton (Lawrence Saint-Victor).

Eric seems currently unwilling to cut Quinn off. He is okay with having what he must consider the best of both worlds. But how long will Donna be able to restrain herself from telling Quinn the truth?

The Bold And The Beautiful Spoilers – Quinn Fuller’s Better Fit

At this point in the arc of Quinn’s life Carter, not Eric, appears to be the better fit. The passion she shared with Carter and their connection implies he is Quinn’s new soulmate.

There is no doubt that Quinn fell in love with Eric years ago and still loves him today. But it also seems that Quinn’s feelings have run their course with Eric.

The age difference between Quinn and Eric and Carter and Quinn may be a factor. At this stage of everyone’s lives, it is reasonable to believe that Quinn and Carter would thrive.

Quinn has gotten away with so much through the years that she naturally believes Eric will forgive anything. What better proof than to look back at the unexpected pairing between Quinn and Carter and Eric’s initial reaction to it?

Eric made the mistake of not telling Quinn about his ED diagnosis. He then made a remarkable, initial decision in choosing to endorse the pairing. Quinn and Carter were shocked and went along with his seeming blessing.

Donna comes back to Eric with none of the above drama. She considers Eric the love of her life and is not interested in any other guy. That no-drama approach appeals to her one-time husband.

Eric is used to being the patriarch of his family and the head of Forrester Creations. He has grown into those roles and understands the responsibility each entails.

Telling Quinn that they are through is not something Eric wants to do at this point in the plot. But he will want to make that decision.

So, Donna needs to be careful not to apply too much pressure or take the initiative by purposely or inadvertently telling Quinn what Eric has been doing.