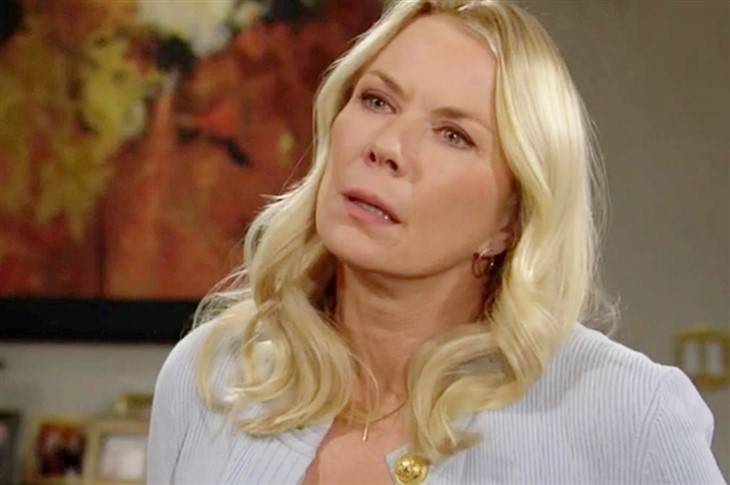 The Bold and the Beautiful (B&B) spoilers document that Brooke Logan Forrester’s (Katherine Kelly Lang) decision to withhold the truth from her husband is followed by her manipulation of Ridge Forrester’s (Thorsten Kaye) grandson.

The teased talk that Brooke has with Douglas Forrester (Henry Samiri) is needed. She feels compelled to coerce the eyewitness, who saw her kissing Deacon Sharpe (Sean Kanan), to keep quiet.

Viewer’s sense of gathering doom is apt. Brooke is repeating a pattern of deception that led to past marital breaks with Ridge.

Brooke should have told Ridge the full truth when he walked in the door on New Year’s Day. But she believed that he would have gone mad, and that may have been a reasonable projection.

However, nearing a month later, she needs to manipulate the boy who is her step-grandson into believing a lie. She will attempt to play on his sympathies and play off his sense of respect in listening to his grandmother.

B&B Spoilers – Douglas Forrester Does Not Hide The Truth

Brooke kissing Deacon, while both were drunk, is not comparable to Beth being kidnapped, sold, and adopted by Steffy Forrester (Jacqueline MacInnes Wood), her name at the time. However, Douglas’ involvement could prove as crucial in this storyline.

Full props to Samiri, who has the confidence of TPTB to deliver another important and impressive series of performances. Also, Kudos to the writing staff for creating a believable scenario for Douglas to be part of.

The Bold And The Beautiful Spoilers – Ridge Forrester Wrecked By Reality

Ridge continues to tell Brooke that he supports her. He genuinely believes that she is telling him the truth, which telegraphs her downfall.

Learning about Deacon on New Year’s Day could have led to a physical confrontation. But at least Brooke had a chance to preserve her marriage.

Now, after withholding information, lying about other details of that night, she also needs to silence a witness. That, even more than the lies, will be seen as reprehensible.

Ridge loves his Logan. But the coming reveal will wreck Ridge and likely end this most recent union on B&B.