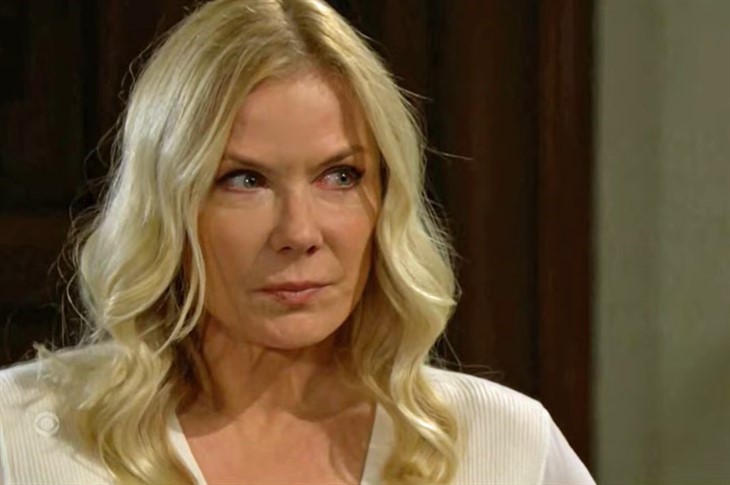 The Bold and the Beautiful (B&B) spoilers for Tuesday, January 25, 2022, reveal Brooke completely freaking out because a truth-teller knows her lies.

The Bold And The Beautiful Spoilers – Why Would Hope Logan Be Shocked?

It’s bad enough that she started drinking again and kissed Deacon Sharpe (Sean Kanan) on New Year’s Eve, with Deacon waking in her bed. It’s even worse to know that Ridge Forrester (Thorsten Kaye) could find out what happened. Brooke (Katherine Kelly Lang) knows Hope Spencer (Annika Noelle) will keep her secret but when Hope tells her that Douglas (Henry Joseph Samiri) is the one who tipped her off to what happened because he swears he saw Grandma kissing Santa Claus, Grandma nearly has a heart attack.

If there’s one thing Douglas can do well, it’s speak the truth. He didn’t care how much his dad told him not to tell anyone that Beth was Phoebe and Phoebe was Beth. He just had to tell someone, just like he has to tell more people now about what Grandma did.

Brooke tries to compose herself as she begs the little boy to keep his mouth shut because she knows once Ridge learns what she did, her ninth marriage to him is kaput. Maybe she should just stop kissing men who are not her husband.

Carter Walton (Lawrence Saint-Victor) has already pumped the brakes with Paris Buckingham (Diamond White) and told her they have to stop kissing and should stay away from one another for Zende’s (Delon De Metz) sake. Maybe he will learn he did this for his sake, as well.

Dr. Grace Buckinghman (Cassandra Creech) can see exactly what is going on between her daughter and Carter and she doesn’t like it one bit. In fact, she is going to make sure it stops before it ever really gets started. To that end, she takes Carter aside and warns him to stay away from Paris or she will make his life hell. Paris has a good thing going on with a Forrester man and she doesn’t want to see her daughter ruin things when she is close to having it all. Stay tuned to The Bold and the Beautiful weekdays to see how these stories play out.

Days Of Our Lives Spoilers: Abigail Is In Grave Danger – Rafe’s Confession