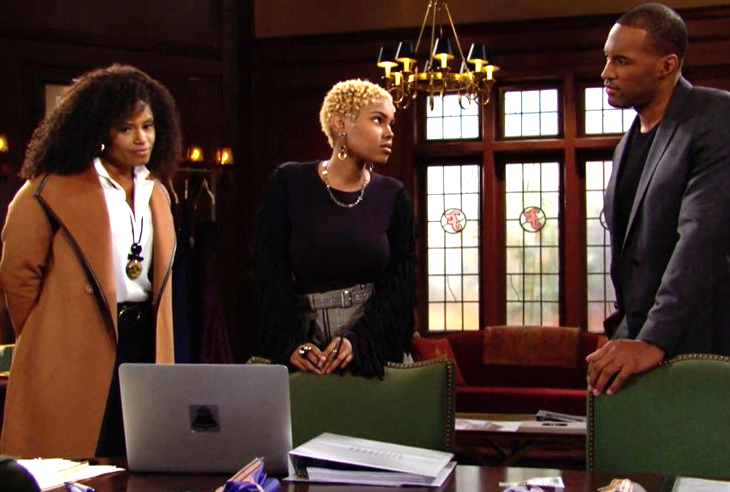 The Bold and the Beautiful spoilers reveal that Grace Buckingham (Cassandra Creech) means well, but could go too far. Grace doesn’t care for Carter Walton (Lawrence Saint-Victor) after hurting Zoe Buckingham (Kiara Barnes). Now that Carter and Paris Buckingham (Diamond White) are getting frisky, Grace takes drastic action to protect her daughter from a “villain.”

The Bold And The Beautiful Spoilers – Paris Buckingham Torn

B&B spoilers reveal that Paris didn’t want to marry Zende Forrester (Delon de Metz). However, she didn’t break up with him either. When Paris first kissed Carter, she claimed to just love him as a friend and didn’t understand the smooch. After seeing Zende with another woman, though, Paris has changed her mind about Carter. It seems that Paris is torn between the two men, especially if she can’t be honest with Zende about locking lips with his best friend.

Despite Paris claiming that she values her independence and freedom, is there another reason for her freaking out over a marriage proposal? Paris has been lost in thought for the past few weeks. It might not be wanting her freedom while she’s young. Maybe Paris is just bored with Zende. After all, he is a good guy and those kinds of men are usually classified as “boring.”

Paris might tell everyone else that she wants a good guy, but she could secretly crave some excitement. Making out with Zende’s best friend and keeping it a secret certainly would fill Paris’ life with some excitement. Each time she kisses Carter, they run the risk of getting caught. It’s the same reason some people have affairs.

The Bold And The Beautiful Spoilers – Grace Buckingham’s Rage

The Bold and the Beautiful spoilers reveal that Grace will cause drama soon after arriving in Los Angeles. Grace cares very much about her daughters. After Reese Buckingham’s (Wayne Brady) public baby scandal and roping Zoe into it, Grace doesn’t trust men.

However, Grace might only have one half of the story. Zoe was betrayed when Carter had an affair with Quinn Forrester (Rena Sofer). That much Grace is aware of, but does she know that Zoe betrayed Carter first by trying to seduce Zende?

When Grace finds out that Paris is locking lips with Carter, she will confront the “love villain”.” Carter will be surprised by Grace’s attack on him. It is already clear that Paris won’t appreciate Grace getting mixed up in her love life.

However, will Carter defend himself to Grace when she lashes out at him? Will Carter tell her that Paris kissed him, not the other way around? Will he admit to stopping the smooching session due to Paris’ relationship with Zende? Will he educate Grace on what Zoe did to him long before “Quarter” began? We will have to keep watching the CBS soap to find out!