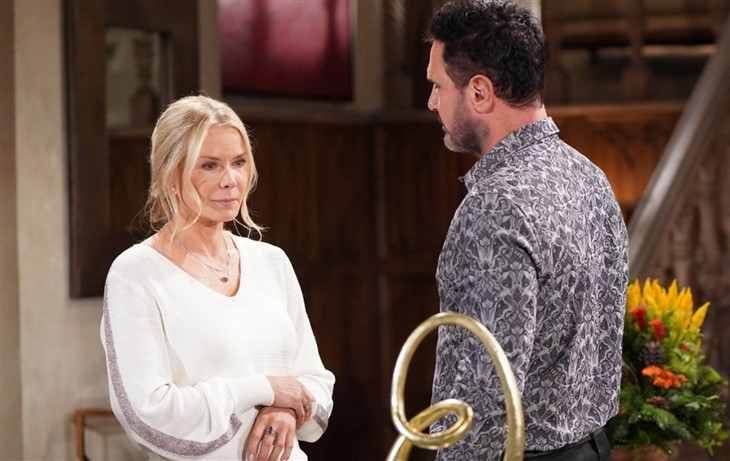 The Bold and the Beautiful spoilers show that there have been a lot of men already that have shown up at Brooke Logan’s (Katherine Kelly Lang) doorstep asking about her relationship status and professing their love. Deacon Sharpe (Sean Kanan) even proposed!

However, one has stood out above the rest according to Lawrence Saint-Victor (Carter Walton), and that is Bill Spencer (Don Diamont), who showed up at Brooke’s door with a declaration of love, then trots off to say the same thing to Katie Logan (Heather Tom)!

Carter doesn’t think much of Bill, and according to Saint-Victor, “Carter sees Bill as an opportunist. Of course, he’s going to say this on Ridge’s wedding day, when she is the most vulnerable. This is not what Brooke needs. It is all about him. Carter’s level of disgust is at an all-time high.”

Saint-Victor continued to say, “Carter is beyond disgusted. He almost gives her the same speech, and Carter is completely shocked at Bill’s ability to pivot. It’s gross.”

It’s after Katie turns down Bill that Carter finally reveals him. It’s not like Carter to confront someone like this, and Saint-Victor hopes it shows viewers what he is made of.

When Carter speaks up, then Bill realizes that Carter’s ‘into her’. This little confrontation spoke volumes about Carter’s care for Katie and how he is falling for her. “Katie has been hurt too many times by this man, and this is when the hero side of Carter steps up,” Saint-Victor tells Soap Opera Digest.

While Carter continues his pursuit of Katie, we cannot imagine this will be his last run-in with Bill, and they will surely have another moment like this that comes around, perhaps a bit worse though. Some viewers are already thinking we could see the two of them throw down and fight over Katie, but at the same time, Bill might just throw in the towel and go try to profess his love to yet another woman.

It is interesting to see this side of a character like Carter and we wonder if this is the era of the ‘new man’ for him.

What do you think? Are you surprised that Carter confronted Bill like this and will there be another moment between them in the future? Share your thoughts and remember to keep watching the CBS soap to see what happens next.