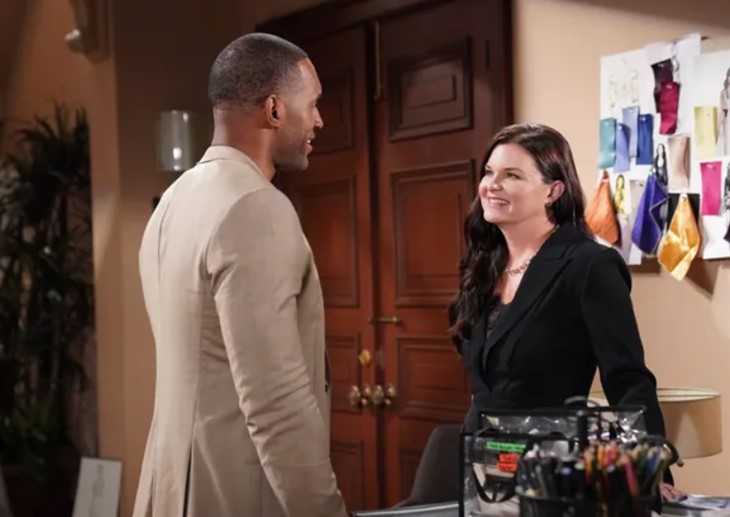 The Bold and The Beautiful (B&B) spoilers and updates tease that it might not be long before Katie Logan (Heather Tom) and Carter Walton (Lawrence Saint-Victor) hit the sheets. Something has been building up for a long time, even before Carter got involved with Paris Buckingham (Diamond White) and it’s about to blow!

The Bold And The Beautiful Spoilers – Bill Spencer Called Out

Carter had come over to Brooke Logan’s (Katherine Kelly Lang) house in search of a pair of special cufflinks for Ridge Forrester (Thorsten Kaye) to wear at his wedding. But when Carter got to the door, before he could look for the special cufflinks given him by Taylor Hayes (Krista Allen) he was stunned at what he heard. Immediately after Brooke turned him down for reconciliation, in which he claimed she was his one and only, he made the same sleazy pitch to Katie.

Carter wasn’t about to let the self-absorbed player get away with that, and he confronted Dollar Bill about it. Katie of course had turned Bill down, because she finally saw him for what he is as well; it’s either all or nothing, and Bill can’t give her that.

B & B Spoilers – Katie Logan Listened And Was Impressed

Neither Dollar Bill nor Carter realized Katie was at the top of the staircase listening to their argument, after having gone upstairs to try and comfort her sister. Katie was obviously impressed at Carter’s defense of her and just as obviously disappointed in Bill’s pontifications, having the nerve to be possessive and tell Carter to stay away. Carter should be able to give Katie his full attention and his heart, although he had to take a bit to process and heal from the ultimate rejection. He and Quinn Fuller (Rena Sofer) were barely together and happy for maybe a month before she decided a life with Carter wasn’t what she wanted and left him. Carter wants a family and Quinn is done with all of that, so she decided it best to move on and move away.

The Bold And The Beautiful Spoilers – A Slow Burn

Of course, since both Carter and Katie have been burned really bad in relationships they may opt for the slow burn instead of rushing to consummate their relationship. On the other hand, they may just share a tentative kiss for the first time and find themselves hitting the sheets in an explosion of passion. As far as having a family eventually, they may face some challenges because of Katie’s health conditions-although she’s done well since her heart transplant and recovered from her kidney issues.

She has had some miscarriages although her most recent pregnancy with her son went well. But Carter’s the kind of guy that will accept his woman’s limitations, and he’ll be glad to be a stepdad to Will Spencer (Finnegan George).