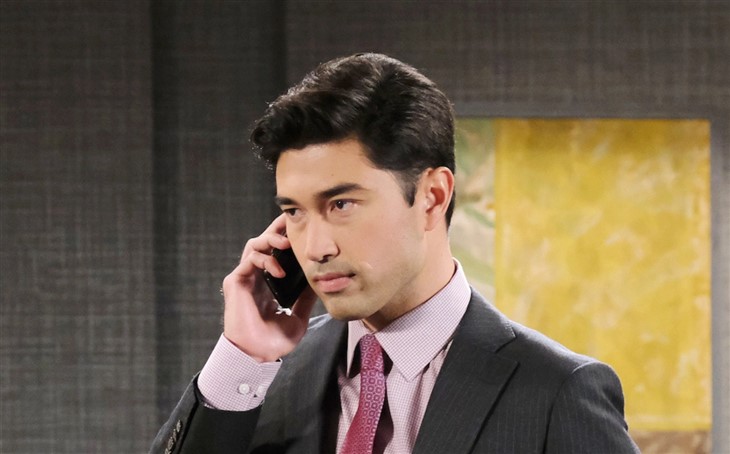 Xander is probably not going to be an option for Gwen even though they are still friends, because Sarah Horton-Cook (Linsey Godfrey) either forgives Xander or stays in the dark. Gwen did Xander a solid by creating a website for Rednax Pharmaceuticals, so Sarah wouldn’t find out his involvement in working for Ava Vitali (Tamara Braun). So unless Xander’s car is traced to the wreck that killed Susan Banks (Stacy Haiduk) and presumably Ava, his secret and his marriage are safe.

So Gwen will stay available and single, and working as a reporter at her dad’s paper, The Salem Spectator. However, she’s so familiar with cover-ups and not quite ethical doings, she and Li could work together as a couple if he came her way.

Even though Dr. Wilhelm Rolf (Richard Wharton) gave Gabi a shot to make her forget what she’d discovered about Stefan’s brainwashing, it could wear off. Wendy Shin (Victoria Grace) and Johnny DiMera (Carson Boatman) both know about it too and they turned the tables on Rolf after Li told him to give them the shots.

There may be a delay for right now with the DiMeras having to set up a funeral and Li and Gabi concentrating on a wedding. But that isn’t going to keep the truth from coming out forever, and when it does, Gabi and Stefan will reunite and Li will need someone sneaky to hook up with. Gwen might just be the perfect woman for Li, and she’ll certainly have that step up in the financial world she’s always wanted if they marry-if Stefan doesn’t fire him!

Days Of Our Lives Spoilers – Gwen Rizczech Would Be Sympathetic

Gwen would certainly be sympathetic to Li being left at the altar for another man, because her wedding to Xander was torpedoed in a similar manner. But Gwen admits to her mistakes and her desperate plotting, whereas Li may never admit to anything he’s done, desperate or not; he didn’t plan to fall in love with Gabi. He was only dating her to take over DiMera Enterprises to start with but when she lost her CEO job that plan was torpedoed.

The only reason Li even has his job now is because of a quid pro quo with EJ DiMera (Dan Feurreriegel). Even if Li and Gwen only had a one night stand, it could be fun to watch.