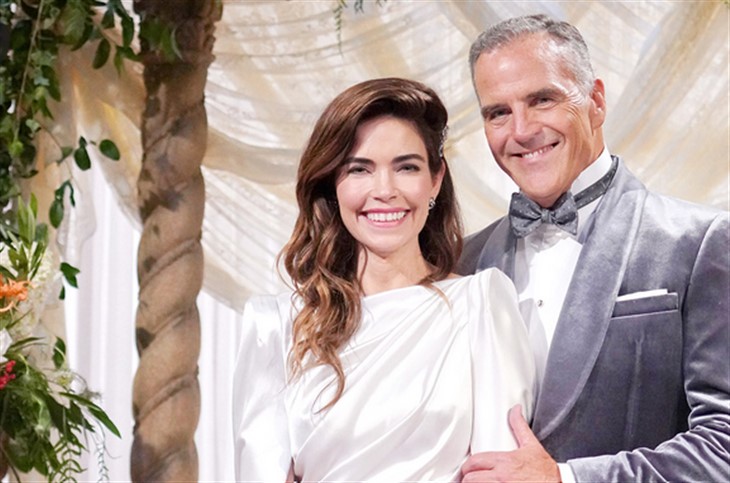 The Young and the Restless (Y&R) spoilers for Thursday, October 14, 2021, reveal Victoria Newman finally getting ready to walk down the aisle and marry a man she barely even knows. What could possibly go wrong? Well, a lot.

Although she has had her doubts, Victoria Newman (Amelia Heinle) insists she is in love with the man who calls himself Ashland Locke (Richard Burgi) and stole all his money from an inheritance an old lady wanted to give to rescue animals. She knows all of this and says it doesn’t matter, but Billy Abbott (Jason Thompson) is not aware she knows it all and still wants to stop the wedding — if he can find his witness to all that Ashland has done.

The Great Victor Newman (Eric Braeden) and Ashland think they have Billy under control, but is Victor pulling the wool over Ashland’s eyes? Is he up to something else?

Y&R Spoilers – Will Victoria Actually Say ‘I Do’?

Victoria does manage to find the miracle gown that Sally Spectra (Courtney Hope) left for her to see and decides yes, she is going to wear this one since she didn’t really like the other one anyway. Score one for Sally, but Victoria still has no idea who really designed the dress. But things are about to get very dicey for Victoria very soon and none of it has to do with fashion and gowns.

The Young And The Restless Spoilers – Nikki Newman Gets A Shocker

When the mother of the bride, Nikki (Melody Thomas Scott) makes a shocking discovery, will she realize that Victoria might be making the biggest mistake of her life? She’s tried to talk her daughter out of this wedding several times, but Victoria has refused to listen. She insists that she is in love with Ashland and nothing he did in the past matters now.

But Ashland keeps coming up with more secrets he has to reveal. Does Nikki discover one of them before Ashland has a chance to fess up. Can she manage to stop Victoria in town or is this marriage meant to be and doomed from the start? Stay tuned to the Young and the Restless weekdays to see how if anyone actually gets married in Tuscany.