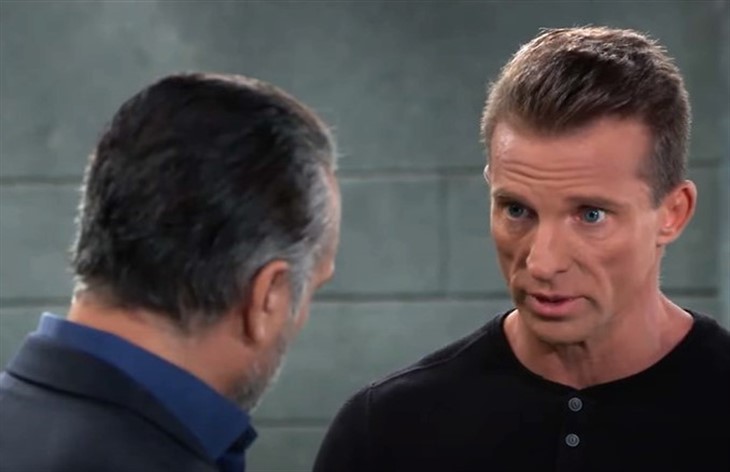 General Hospital (GH) spoilers for Thursday, October 14, 2021, reveal in Port Charles Sonny finally realizing what he walked in on the night he returned to Port Charles.

It took a while, but thanks to Nina (Cynthia Watros) telling Sonny (Maurice Benard) that he got home in the nick of time, it finally dawns on the man that Jason (Steve Burton) and Carly (Laura Wright) were in his bedroom in the dark and standing very close to one another the night they got married. Before this, he seemed to ignore what he saw because he was too into the idea of revealing to everyone he was alive, back, and taking names. But now Sonny really wants to know what the heck was going on.

To that end, he confronts Jason at the boxing gym and just asks him what would have happened if he hadn’t walked in that night. Jason and Carly did agree that if Sonny asked, they’d just tell him the truth. Jason is also not good at lying about things like this, but will he do it if that’s what he thinks Carly wants?

Little does Sonny know that Ava Jerome (Maura West) is now with Nina telling her she thinks her friend still has a chance with Mike. This will be fun for Ava, indeed.

Spencer (Nicholas Chavez) is still stuck at the PCPD and Chase (Josh Swickard) is trying to figure out what is really going on. To that end, he has a talk with Cameron (Will Lipton) and wants him to just tell him what he knows about Spencer’s misdeeds.

Elsewhere, Carly and Josslyn (Eden McCoy) have a heart-to-heart talk where they both talk about anger and revenge on those who wronged them. Like mother, like daughter.

General Hospital Spoilers – What To Do About Austin Holt

Britt Westbourne (Kelly Thiebaud) is at a loss knowing that Austin (Roger Howarth) violated HIPAA laws, but also knowing that Brook Lynn Quartermaine (Amanda Setton) set him up to do it. She doesn’t want to have to fire or discipline Austin, but she also knows she has to do her job right. Austin knows he is in big trouble and wants a lawyer. Is Scott on his way? Stay tuned to General Hospital weekdays to see how these stories play out.