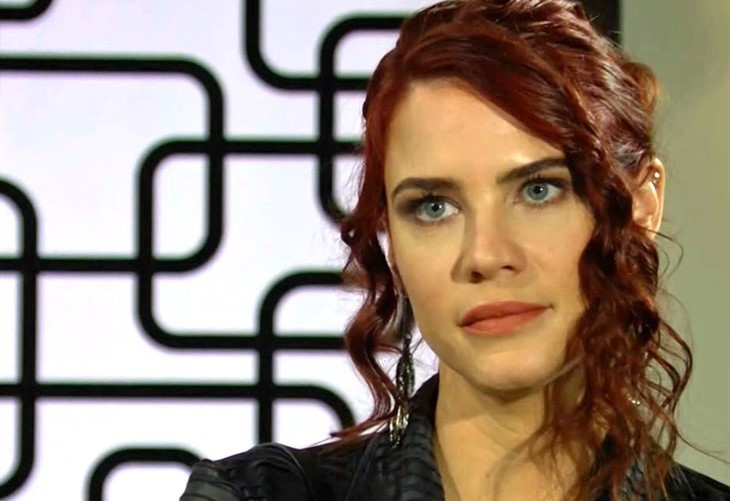 The Young and The Restless (Y&R) spoilers and updates tease Adam turned her down again so the redhead is reverting to past behavior and decided to cause problems for Jack and Phyllis. Her motive is not clear but she could be considering Nick as a backup plan if his brother does not come around.

Sally Spectra (Courtney Hope) was spurned by Adam Newman (Mark Grossman) for a third time after she kissed him. Instead of riding the wave of designing Victoria’s stunning wedding dress, she has returned to her sneaky behavior. When she walked out of Adam’s room in Tuscany she saw Phyllis leaning against Jack as they sat on the bed and snapped a picture with her phone. Sally later saw the two again and when she ran into Nick Newman (Joshua Morrow) and kept asking about Phyllis.

Y&R Spoilers – Nick Newman Could Be The Target

Sally has made a name for herself and the Newman fashion division. She should be working on her next design but instead may be considering blackmail. It’s not clear who her target will be or what was behind her capturing the image but she could show the photo to Jack, Phyllis, or Nick. Spoilers tease that Phick may have come to the end of the road and that Phack is growing closer. Sally might set her mind to focus on Adam’s brother just to get under his skin.

After his encounter with Sally, Adam did a lot of reflecting on the situation. He cares for Sally but loves Sharon and is dealing with Chelsea’s mental health situation. Adam might consider changing his mind but in the meantime, Ms. Spectra will be plotting her next move. If Adam does give in to the redhead he will not be with her long because his heart will always belong to Sharon.

Sally promised Phyllis that she would get even after she was kicked out of the Grand Phoenix and now might be her chance. She could however end up disappointed as things might not go the way she is expecting. Nick could return from London and decide that he and Phyllis should go their separate ways. He already knows the connection between Phack is getting stronger so Sally’s photo may not have the desired effect.