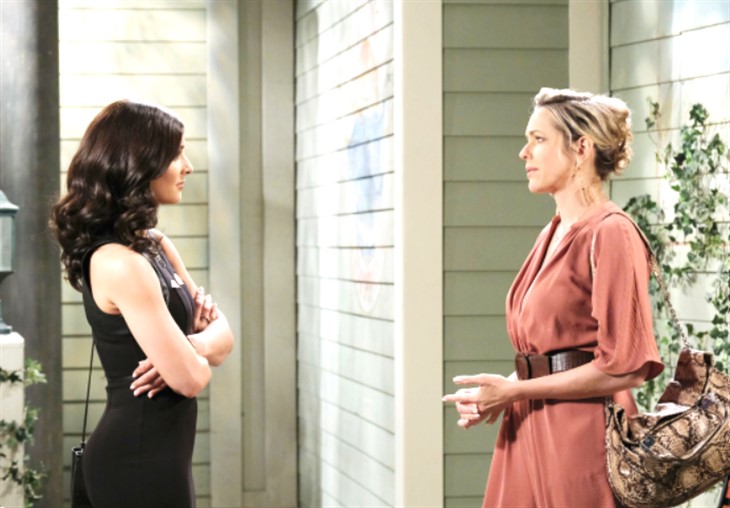 Days Of Our Lives Spoilers -‘Stayla’ Snoop For Leads

Steve needs a lead or some kind of clue which direction to start the investigation. Steve and Kayla Johnson (Mary Beth Evans) were dining at the same restaurant as EJ and Nicole. Pretending to be drunk, Kayla walked over to EJ and Nicole’s table and began rambling. EJ eventually left the table for a few minutes and left his phone. Nicole gave Steve and Kayla permission to look at the phone to see if EJ and Kristen had been in contact with each other.

During the week of October 25, EJ will blast Nicole for her deception. Nicole will pretend to not know what EJ is talking about. The co-CEO informs Nicole that he knows she allowed Steve to snoop through his phone. In fact, EJ would never leave his phone where others could take a look at it. So, it was no coincidence that EJ just happened to leave his phone on the table when Steve looked through it.

DiMera Enterprises, as well as the entire DiMera family, have a lot of secrets and schemes. Some of these are just business details that Steve wouldn’t be interested in. However, DiMera Enterprises has competition, so EJ would want that intel kept private. On the other hand, the family does commit a lot of crimes. Loyalty is important to the DiMera family, including EJ.

The whole reason why EJ dumped Sami DiMera (Alison Sweeney) wasn’t because of her affair with Lucas Horton (Bryan Dattilo). Sami kept lying to her husband. EJ has to be able to trust the person that he is with. Despite having a history with Nicole, EJ will realize he can’t trust her either.

Days of Our Lives spoilers reveal that Nicole won’t be the only one deemed untrustworthy. Philip is still blowing up each time he sees Chloe and Brady Black (Eric Martsolf) together. Philip claims it’s Brady he doesn’t trust, but Chloe doesn’t view it that way. Despite being faithful to Philip, he will secretly test Chloe’s loyalty.

However, Philip has a tendency to read something into every interaction Chloe has with her boss. So, she likely “fails” the loyalty test despite there being no cheating.

DOOL Spoilers – Finding the One

EJ will realize that his best option is Sami and it’s just in time because she’s coming back to Salem. Meanwhile, Chloe is getting fed up with Brady and Philip’s jealousy and fighting. Instead of choosing Philip or Brady, Chloe just might tell them both to take a hike.