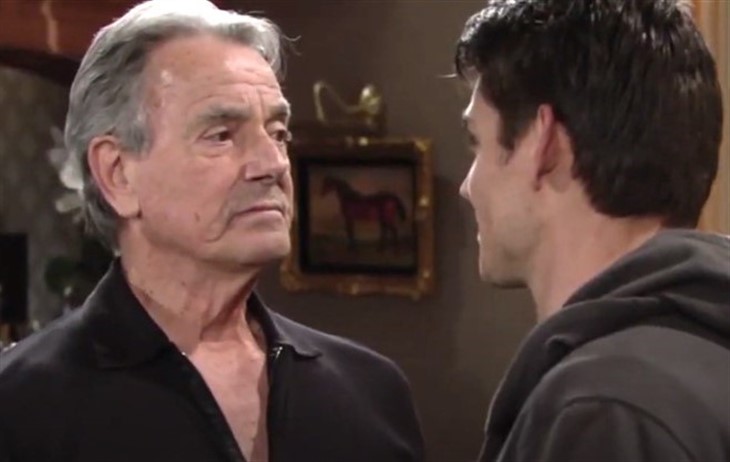 The Young and The Restless spoilers from a recent episode revealed Jesse Gaines (Jamison Jones) was controlled, temporarily, in a wine cellar in the Newman Palazzo in Tuscany, Italy. He had come to the wedding as the guest of Billy Abbott (Jason Thompson) who was trying to expose Locke in order to protect Victoria and their children. Gaines had a video of himself holding up a letter from Camilla Rhodes (uncast character) which purported to spell out in her handwriting that Locke was to receive nothing in her will.

According to Y&R spoilers, Gaines Sr. (mentioned character) who was an attorney had colluded with Locke, whose real name was Bobby DeFranco, to write up a fake codicil to her will that left everything to Ashland Locke! Billy wound up deleting the video from his phone but Gaines still has it on his! Victor had told Adam that Gaines was likely to stay a problem, and that his gift to Ashland was to ensure that problem doesn’t happen. Adam agreed to protect their family no matter what it took!

The Young and The Restless fans know that neither Victor nor Adam have always had the squeakiest clean pasts! Adam is probably the child most like Victor among his children, although where business matters are concerned, Victoria comes in a close second! Both Adam and Victor have faked their deaths and gone by other names – this last time, when Adam was in Las Vegas as Spyder his name change wasn’t intentional. He had amnesia stemming from injuries in a car which a raging Billy had pushed him over a cliff with him in it! This was shortly after the unintentional motor vehicle homicide of Billy’s daughter with Chloe Mitchell, (Elizabeth Hendrickson) whose corneas were transplanted with Connor Newman (Judah Mackey) as the recipient.

Connor had inherited the same eye problem that had made his grandmother Hope Adams (Signe Coleman) blind. Viewers of The Young and The Restless can understand why Victor and Adam don’t have such a huge problem with how Ashland came by his empire as Nick Newman (Joshua Morrow) and Billy did. Victor and Adam work on a scheme to make sure Gaines won’t be a problem in the future.

Viewers of The Young and The Restless know that one way to make sure an enemy won’t harm you is to take away his weapons! Victor and Adam discuss whether there might be a way to take Gaines’ leverage away from him before having to take – more extreme measures!

There is always the possibility it’s a copy and he has the original somewhere else, but he’s already trapped like a rat! It won’t take much for them to disable Gaines, find the letter he has with him and destroy it and perhaps just destroy his phone as well! Victor will want to keep their hands clean so he’ll get some of his people who do the dirty work to do the dirty work!