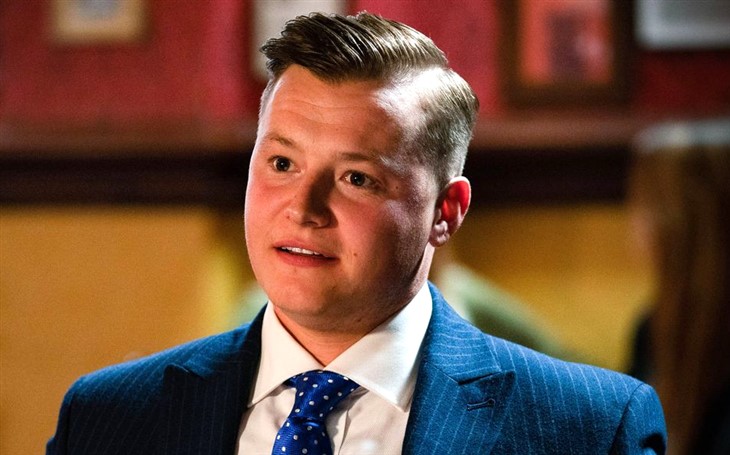 EastEnders Spoilers hint that Aaron Monroe (Charlie Wernham) is going to become intertwined in the racism storyline. The newcomer is going to cause some trouble as he enters into the storyline. Aaron entered the scene this week on the 21st of October. He immediately tried to hunt down his dad, Harvey Monroe (Ross Boatman).

Harvey was recently fired from his job after making a comment towards Ash Kaur (Gurlaine Kaur Garcha) and lied to Kat Slater (Jessie Wallace) about it. He wants to get his job back and was going to try to apologize to Ash until Aaron showed up. When Aaron showed up he convinced his dad to not apologize to the dismay of Dana Monroe (Barbara Smith) who was not happy to hear him say that. However, EastEnders spoilers reveal Aaron told her that she should have sided with their dad.

Aaron will have an upcoming EastEnders scene that will air soon in which Aaron will find himself threatening Kat Slater for firing his dad. As he thinks that she fired him unfairly. His sister, Dana on the other hand tries to beg Ash to forgive Harvey. Ash is also approached by Aaron later on when she is in the Queen Vic. He confronts her which Dana learns about later on.

Dana in return confronts Aaron over his rude behavior. He does not care much and just brushed her words off. He then turns his attention over to Bobby Beale (Clay Milner Russell) who is a follower of Islam and has been looked down upon by Harvey.

EastEnders Spoilers – Aaron Monroe Takes Things Into His Own Hands

In an interview with the Digital Spy, the newcomer Wenham who plays Aaron Monroe says that Aaron is “opinionated about everything”. He went on to say, “He’ll try to take control of the situation, sort things out and try to do best by his dad and his sister. With Dana dating Bobby, Aaron is also going to have an opinion on whether he’s good enough for her. He’ll have a say on his dad, the flat, and his dad’s job.” He continues by saying, “It all comes from a good place, with his family especially. Aaron wants to protect them, he wants to keep them safe, and he wants people to respect them.”