Y&R Spoilers: Mariah And Tessa Feud – Phyllis and Jack Together 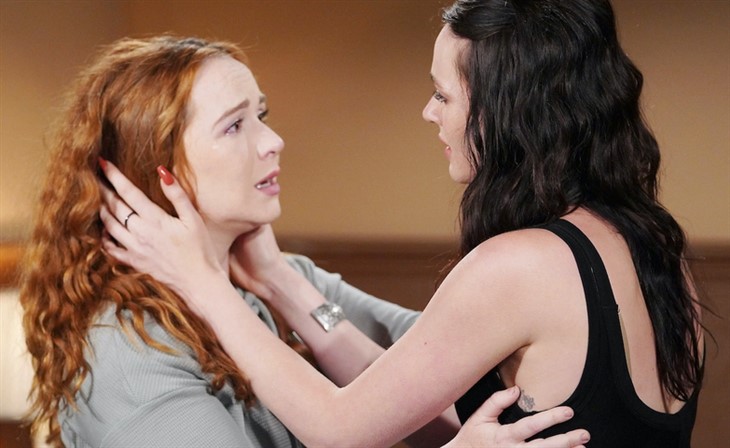 The Young and the Restless (Y&R) spoilers for Friday, October 1, 2021, reveal Victoria Newman nearly losing her mind right in the middle of Crimson Lights.

Mariah Copeland (Camryn Grimes) has been having quite a hard time since being held captive for weeks with nobody really worried about her and then giving birth with a virtual doctor on a smartphone. That’s enough to do in anyone. Having to then hand that baby to Abby Newman (Melissa Ordway) was just too heartbreaking, so now she wants a baby of her own and for Tessa Porter (Cait Fairbanks) to carry this prospective baby.

Tessa was not happy about this so she told Sharon (Sharon Case). And Sharon had to have a talk with Mariah about it, making Mariah very angry that Tessa betrayed her confidence. The two women have it out on Friday as Mariah rages on and Tessa tries to figure out how she can help her. Clearly, a happy life is not working out as planned.

Meanwhile, Victoria Newman (Amelia Heinle) seems as furious as Mariah as she continues to lash out at Nick Newman (Joshua Morrow) for digging into Ashland Locke’s (Richard Burgi) past and then not really believing his car fire/new identity story. How dare Ashland, the man of so many secrets, be doubted.

Victoria can’t handle that idea, so it looks like she goes ballistic on Billy Abbott (Jason Thompson), too. After all, he has been pushing to get information about Ashland more than anyone. Nikki Newman (Melody Thomas Scott) witnesses all this and is not happy.

Now that Nick is back from New Jersey, he certainly wants to be with Phyllis (Michelle Stafford). Sadly, he finds her with Jack Abbott (Peter Bergman) once again. Phyllis and Jack just can’t stay away from one another and now that they have their children getting married soon, reminiscing and wedding talk give them something in common. Will Nick finally see there may be something very amiss with his relationship? Perhaps he should focus on his own rather than Victoria’s. Stay tuned to The Young and the Restless weekdays to see how these stories play out.