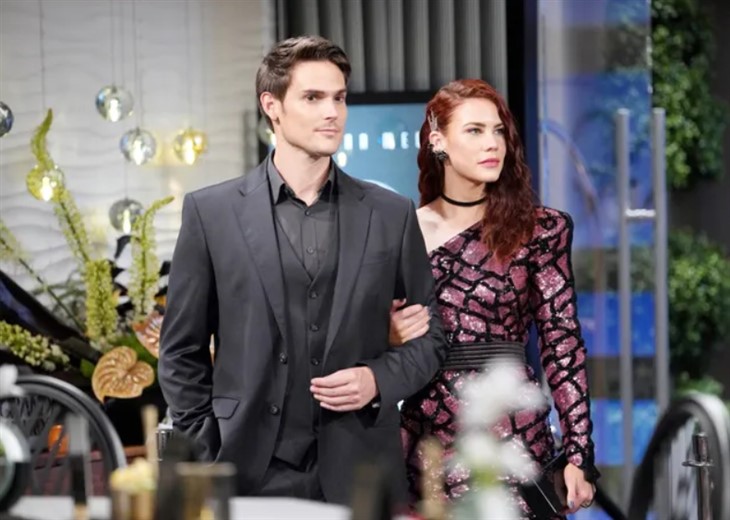 The Young and the Restless (Y&R) spoilers document that in Genoa City, Wisconsin Adam Newman (Mark Grossman) wanted to create a stir. Walking into the highly anticipated Newman Media launch party at the Grand Phoenix Hotel with Sally Spectra (Courtney Hope) on his arm made that happen.

Jack Abbott (Peter Bergman) was in the crowd of Y&R regulars. He’s still affected by Sally, though he doesn’t front it to her. No matter, Jally has been done for a while, which Sally regrets.

Whether Ally will be the hashtagged nickname for this pairing is a secondary question. The first is whether this coupling is just for show?

Adam is sincere about reforming. He’s been on the straight and narrow course for months and plans to continue.

The fact that he fully reconciled with Victor Newman (Eric Braeden) would be news all on its own. However, the bond Adam developed with his older brother, Nick Newman (Joshua Morrow), furthers proof that positive, personal growth is real.

The above makes Adam’s use of Sally a bit off-putting. Victor warned him to stay away from romance, making this move a defiant one.

Sally arrived in Genoa City, Wisconsin, determined to start fresh. She was barely in town when the battle with Summer Newman (Hunter King) was instigated. That ended terribly for Sally, as her personal life and career were wrecked.

Crossover fans from The Bold and the Beautiful know Sally’s track record. She repeatedly sabotages herself, then tries to start over again.

Whether Sally can make inroads with Adam will likely depend on his call. He’s a far more accomplished manipulator, having scored many more terrible wrongs through the years.

The Young And The Restless Spoilers – A Pairing To Watch For

If Adam and Sally progress to couple’s status, then those who are connected to them will be impacted. Those are the types of personal judgment calls that have hurt both people in the past.

Chelsea Lawson (Melissa Claire Egan) will return to GC in the fall. She’s already expressed her doubts about Sally, which could be part of Adam’s calculation in wanting to be seen with her. The other involves the public images that will be generated through Ally’s debut appearance.

As for Newman Media, all buzz is good buzz. So, on this plot point, Adam should realize a victory. However, his father won’t see it that way.