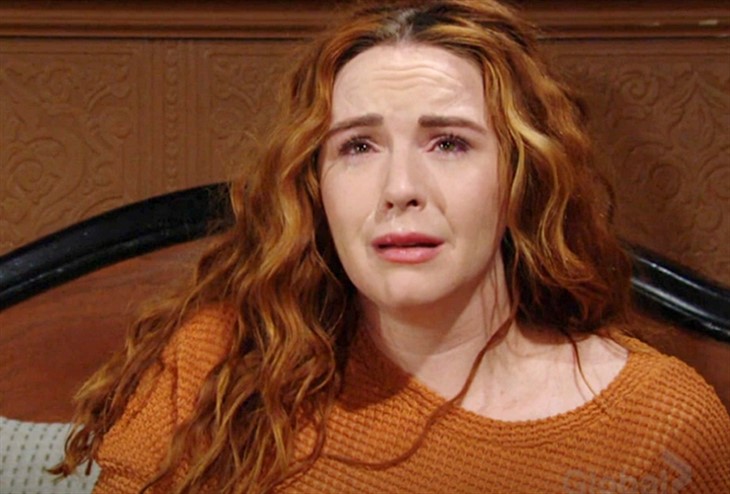 The Young and the Restless (Y&R) spoilers for Friday, September 3, 2021, reveal Mariah having a hard time letting go — of more than just the baby she was carrying.

The Young And The Restless Spoilers – Is Mariah Copeland Damaged?

Mariah (Camryn Grimes) spent weeks almost all alone in a wood-paneled room. The only person she had to talk to was the baby she was carrying in her belly and perhaps she bonded with him more than she ever expected to when she took on the job of Abby’s (Melissa Ordway) surrogate. Bowie was her one companion day and night and talking to him while feeling him move in her belly was the one thing that kept her sane in an otherwise insane situation.

She was terrified the entire time and even more terrified when she thought she’d have to deliver herself. Now, Abby has the baby, she couldn’t even honor her by keeping the name Bowie that Mariah gave him before he was born, and she continues to have flashbacks of those weeks filled with so much fear. Will Mariah come through this ok? Will she start regretting her decision to carry a child she cannot keep?

The Newman Media launch party definitely had its fair share of fireworks — especially when Adam arrived with Sally Spectra (Courtney Hope) on his arm. Her fight with Phyllis (Michelle Stafford) was epic, and that led to more fireworks later on. But the point of the party wasn’t just redhead drama. It was also supposed to celebrate the new formation of Newman Media and get the company off the ground.

On Friday, Adam (Mark Grossman) and Victor (Eric Braeden) finally put on a public united front and share what their plans are. This feels like a turning point for the father and son. Their relationship has never been good and both men have done horrific things to one another, something that has broken Victor’s heart for years. Now, it looks like things might be changing. Are things also changing for Adam as he breaks free of two women who have brought him down for years? Stay tuned to the Young and the Restless weekdays to see how these stories play out.