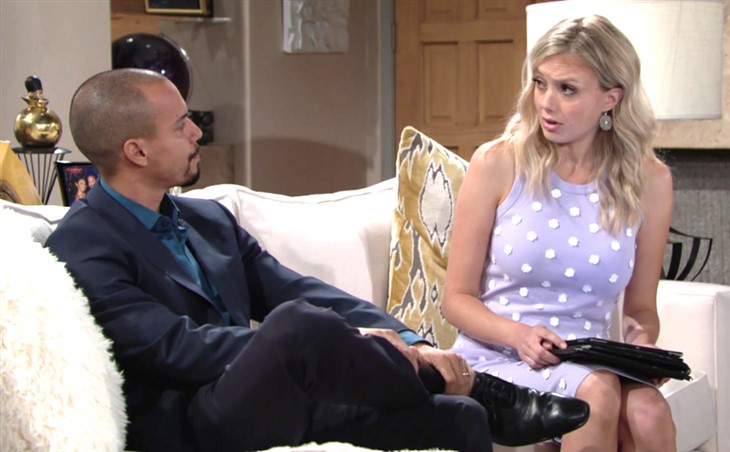 The Young and the Restless (Y&R) spoilers indicate that Abby Newman’s (Melissa Ordway) marriage to Chance Chancellor (Donny Boaz) may come to an end.

Newlyweds Abby and Chance’s marriage got off to a rocky start when their plans to start a family were derailed. Things got worse when Chance had to go away for a secret mission.

With Chance gone, Abby promised to continue with their plans to have a baby. Abby now has the child she’s always wanted, however it may lead to the end of her and Chance’s marriage.

Abby’s road to motherhood hasn’t been easy. As Y&R fans know, she had a miscarriage during her and Dr. Ben “Stitch” Rayburn’s (Sean Carrigan) marriage. When her and Chance became series in their relationship, the discussion of children came up. Abby’s fears of the past kept her from a commitment to Chance.

When Abby and Chance decided they were ready to ty for a baby, they were dealt with double blows. Abby was told she couldn’t carry a baby, and Chance’s learned he was sterile. Yet, that didn’t stop the couple from looking at other options.

With Chance away on his mission, Abby found a way for them to have a baby. With Mariah Copeland (Camryn Grimes) as their surrogate and Devon Hamilton (Bryton James) donating sperm, Abby was getting the baby she wanted.

Once again Abby’s life was filled with drama when Stitch kidnapped a pregnant Mariah. However, Abby came to the rescue just in time as Mariah was going into labor.

With the help of Devon, Abby coached Mariah through labor and delivered a son named Bowie. Abby’s overjoyed with the arrival of her baby boy, as is Devon.

The two are already bonding over the little bundle of joy, and they’ll be growing closer in the coming weeks. Devon’s always wanted to be a father, and years ago he lost his son when Hilary Curtis (Mishael Morgan) was injured in a car accident.

With Bowie’s arrival, Devon will have an opportunity to be a father. Abby will no doubt let Devon be part of Bowie’s life, and he may become a permanent fixture in hers.

The Young And The Restless Spoilers  – Abby Newmn And Devon Hamilton Romance?

Y&R fans are wondering when or if they’ll ever see Chance again. It appears the show has no plans to bring the character back. With Chance not coming home anytime soon, it may be time for Abby to move on.

Although she’s married to Chance, before long his absence is going to affect her. She’ll feel lonely without him, and question whether she can stay with him given his job. Chance should be home with Abby and the baby, yet he put work ahead of her.

With Chance gone, Devon will step up to be there for Abby and Bowie. The two spending time together will lead to a romance blossoming.

For years, Y&R has been hinting at a possible romance between the two. Now it looks like it may happen. Yet, their romance will lead to Chance and Amanda being left out in the cold. Keep checking Soap Opera Spy for more The Young and the Restless spoilers, news, and updates.