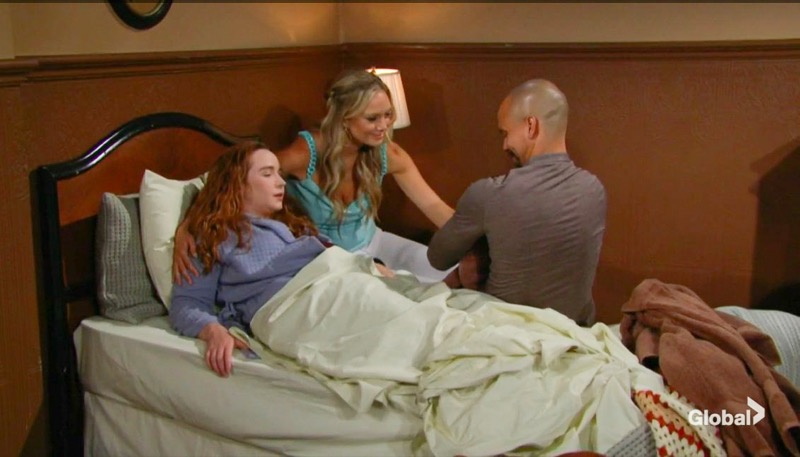 The Young and the Restless (Y&R) spoilers for Friday, August 30, 2021, reveal in Genoa City, Wisconsin a dream come true for Abby Newman as she can finally bond with her baby.

The Young and the Restless Spoilers: Mariah Is Finally Rescued

Mariah (Camryn Grimes) truly thought she was going to deliver a baby out of her body all on her own and got everything ready for the occasion. It’s a good thing Stitch (Sean Carrigan) left her all those blankets. It’s also a good thing that Stitch also broke down and fessed up, leading Abby (Melissa Ordway) right to where Mariah was so Abby could deliver her own baby — wearing white pants.

Devon (Bryton James) also showed up in the nick of time to meet his biological son. On Monday, Mariah and Tessa (Cait Fairbanks) finally reunite for the first time in weeks. It’s a dream come true for everyone as all is right at the end of this very scary time. Of course, Stitch also has to provide some answers and explain why he took Mariah and did that to her. He clearly wanted to be caught and for Mariah to be found because he did everything he could to get caught. But is there more to this story than meets the eye?

Sally Spectra (Courtney Hope) is a young woman who could never leave well enough alone and likes to stir up trouble. She always thinks someone has wronged her so she will mess with people’s lives until she’s satisfied. She sounds a lot like Phyllis (Michelle Stafford), her sworn enemy in Genoa City. Sally has been noticing Phyllis spending a whole lot of time with Jack (Peter Bergman) of late and decides to use that to her advantage as she mentions what she’s seen to Nick (Joshua Morrow), Phyllis’s current man.

Sally’s machinations plant a seed of doubt in Nick’s mind about his relationship, so he questions Phyllis about her friendship with Jack, her other ex-husband. Does Phyllis still have feelings for him? Where does Nick stand? These are things Nick Newman needs to know but will Phyllis give him the answers he wants to hear or will this become the beginning of a new love triangle where Jack wants a woman who is closer to his age. Stay tuned to The Young and the Restless weekdays to see how this surrogate story plays out.