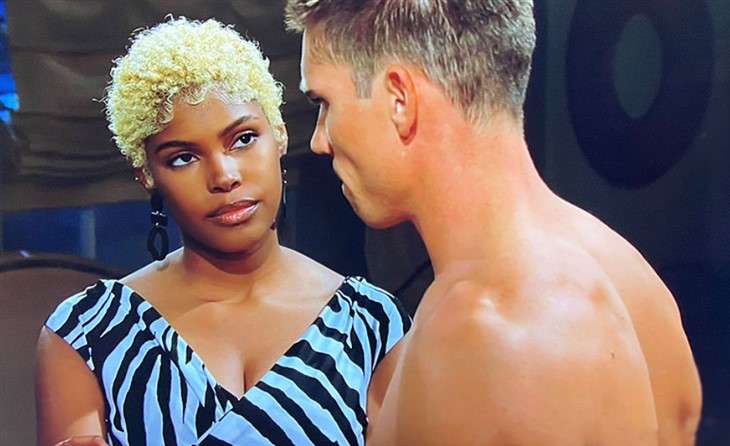 The Bold and the Beautiful (B&B) spoilers for Thursday, September 2, 2021, reveal in Los Angeles Paris Buckingham being right there when Finn needs her most. It looks like she wouldn’t even have it any other way.

Finn (Tanner Novlan) is in the doghouse — or at least in the guest house we never knew Steffy (Jacqueline MacInnes Wood) had up on that cliff, but somehow Paris (Diamond White) is still living in the big house. That doesn’t mean she’s not spending some time in the guest house with her new best buddy Finn. She is always there when he needs her and she is happy to make herself available — for anything, it seems.

On Wednesday, Paris tells Finn she is on his side in this debacle with Sheila (Kimberlin Brown). It’s not like he invited her over. He was ambushed and did ask her to leave so he wasn’t actually trying to go behind Steffy’s back. Finn needs to hear all this to feel better about himself and Paris is happy to provide an ego boost. So, um, what is happening with Zende (Delon De Metz)? Did Paris just forget he exists and they were supposed to be giving a relationship a go?

Seeing Quinn (Rena Sofer) again has Carter (Lawrence Saint-Victor) not knowing what to do with his life. He truly thought he could get over there but there she was looking so ravishing. It’s a shame he has to be the good guy here and give her up when he can’t get her out of his head. On Wednesday, Quinn replays in his mind his brief fling and romance with Quinn and wonders if he was a fool to let her go back to Eric (John McCook).

They admitted they were in love with one another. There is no reason they shouldn’t be together except not wanting to hurt Eric. Will Eric’s little problem allow that to happen? After all, when a woman doesn’t get what she needs, you never know what might happen. Stay tuned to The Bold and the Beautiful weekdays to see if Carter and Quinn find a way to figure things out.