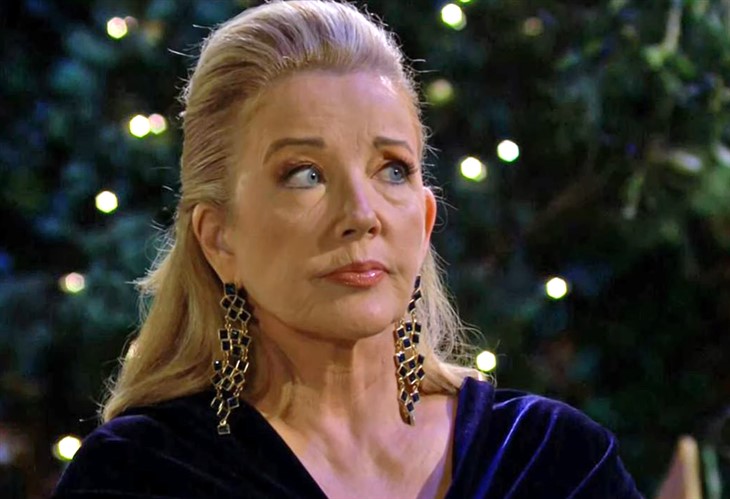 The Young and The Restless fans know that even after Adam proved himself to Nick Newman (Joshua Morrow) that he is for his family’s welfare after saving him from a collapsed house in a tornado and saving Faith Newman (Reylynn Caster) twice, Nikki is still suspicious of Adam’s motives when he has a sudden change of heart.

Y&R recaps and spoilers show that Adam not only got an ambulance to Faith when she wrapped a Newman farm truck around a tree, he also donated a kidney!

The Young and The Restless spoilers indicate the one person in the Newman family that Adam hasn’t tried to cozy up to is Abby Chancellor (Melissa Ordway) and when Adam finds out from Victor Newman (Eric Braeden) that Chance Chancellor’s (Conner Floyd) been presumed killed in a bombing, Adam is grieved. Viewers of The Young and The Restless will recall that Chance saved his life, and he feels he owes it to Chance and Abby as well to help in the search to bring Chance home, even if it is only his remains. Nikki is suspicious that Adam just wants to be the hero to toot his own horn and gain Abby’s respect and her acceptance!

The Young and The Restless updates and spoilers tease that the official search and rescue team at the bombed safe house may not allow civilians to help in the search. Victor advises his son of the fact, and Christine Blair (Lauralee Bell) appreciates Adam’s offer, spoken of to her by Victor, but she doesn’t think that he would be allowed into the search area either. Adam, however, remembers when he was presumed dead and Victor didn’t give up hope – and sent Chance to look for him.

Viewers of The Young and The Restless will recall that the situation was almost as bad as a bombing – Adam went over a cliff in a car and it exploded and caught fire! Adam just wants to give Abby some hope to hang on to, at least until remains are found and verified to be Chance’s. Expecting the worst and hoping for the best doesn’t seem to be helpful for Abby at this point, so he gives her a call.

In Adam’s case he had faked his death, but Chance later found him alive anyway in Las Vegas, with plastic surgery and brought him back to Genoa City. Many years later Chance pushed Adam out of the way of a bullet and took the bullet himself. Chance broke off ties with Adam, partly at the insistence of Abby, because of Adam’s criminal past. But Adam wants to at least give Abby some hope that Chance could have survived, if nothing else – he did, in a similar situation, after all.

Chance could have wandered off scarred and damaged, and be in a hospital somewhere nearby not knowing who he is! Adam reaches out to offer his help if she wants it. He may not be able to search the bombed site, but he could check nearby hospitals. It’s up to her!