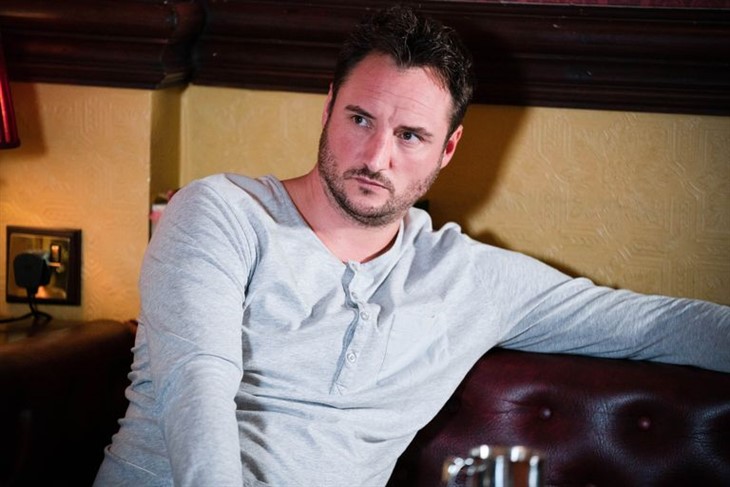 EastEnders Spoilers hint that there will be more information revealed about the baby storyline that aired on Friday, October the 29th. The episode showed Martin and Zack get themselves into trouble and to cheer them up, Sharon took the two guys out.

However, as they return home, Martin sees a baby sitting in front of their home and the three are shocked until they find the note with everyone assuming that the note is meant for Zack. However, who does the baby really belong to?

In the scenes that are set to air next week on EastEnders, Martin Fowler (James Bye) and Zack’s baby story will continue and viewers may get more information. The two will decide to get to the bottom of who left the baby on their doorstep and who was the father of the baby. After searching for the mother, they find themselves having a hard time tracking down the mother of baby Alyssa.

As viewers already know, Sharon and Martin first assumed that the baby was Zack’s baby and it seems Sharon’s opinion on the topic has not changed. Zack Hudson (James Farrar) is horrified by learning that Sharon just assumes that the baby is his on the other hand Martin is just as alarmed by the appearance of the baby.

Sharon Watts (Letitia Dean) takes things into her own hands when she suggests that they go to the police if they don’t hear anything back anytime soon. Sharon prepares to take Alyssa to the police along with the two guys.

However, EastEnders spoilers show Zack brings up the idea that they get a DNA test to see if one of them really is the father. This means that the two of them will soon learn if one of them is the father. Another thing set for next week is Gray and Chelsea getting engaged to one another. Gray struggles with his dad’s funeral and this leads to him connecting with Chelsea once again.

While he is drunk, he decides to propose to her. Will this relationship last or will things end again? There are two weddings set to take place during Christmas will Gray and Chelsea go through with their marriage?