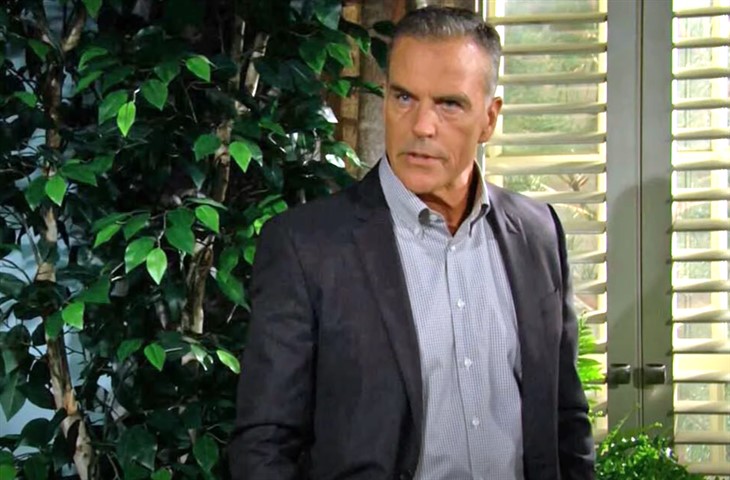 The Young and the Restless Spoilers for the next two weeks are serving up hot “spoiler tea.” So, all you Y&R Spoilers fans grab a cup and raise your pinkie fingers. Here is what the Young and the Restless spoilers say we can expect. Ashland Locke (Richard Burgi) will make a confession about a dead Bobby DeFranco. A trip that Victoria Newman (Amelia Heinle) takes will get tricky. And Billy Abbott (Jason Thompson) will be stopped in his tracks.

The Young And the Restless Spoilers – Fire, Fire Everywhere

During the week of September 27-October 1 The Young and the Restless (Y&R) Spoilers tease there seems to be no end to the drip-drops of information Ashland Locke (Richard Burgi) reveals. He is trying to stay steps ahead of everyone without confessing the whole truth and nothing but the truth about himself. As quickly as he puts one fire out another one will start. With the help of Victor Newman (Eric Braeden) one fire will be quenched. Victor will intercept blackmailer Jesse Gaines (Jamison Jones) and will pay him to stop harassing Ashland. And in typical Victor Newman fashion he will threaten Jesse with prison time.

Ashland Locke (Richard Burgi) will show his gratitude to Victor (Eric Braeden) by vowing to ensure he will make Victoria happy. But Ashland will not be able to exhale. Y&R spoilers reveal Nick Newman (Joshua Morrow) will return from Toms River, NJ with “coffin nailing” information. Nick will ask for a private meet up with Ashland. Ashland will strategize a show of openness by bringing Victoria Newman (Amelia Heinle) with him to the meeting. However, Ashland will not be prepared for the shocking information Nick has uncovered.

The Young And The Restless Spoilers – Who Is Bobby DeFranco?

Y&R spoilers say Nick Newman (Joshua Morrow) will bring up the name of a “Bobby DeFranco” who allegedly died 40 years ago in a car accident. An unnerved Ashland (Richard Burgi) will admit to Victoria Newman (Amelia Heinle) that he is Bobby DeFranco, and he took that opportunity to become Ashland Locke.

The Young and the Restless Spoilers reveal Victoria Newman (Amelia Heinle) will be disturbed by the new information Nick Newman (Joshua Morrow) delivers. Here we go again, yet another secret brought to light. But she will stand by her man. Victoria will take her frustration out on her brother Nick for digging up that bombshell information.

The Young and the Restless Spoilers – Billy Abbott Put On Pause

Y&R spoilers say Billy Abbott ( Jason Thompson) will be highly irritated that his proposition with blackmailer Jesse Gaines (Jamison Jones) fizzled out. Billy will be even more irritated when he learns Victor Newman (Eric Braeden) threw the monkey wrench in his plan. Billy will also be uninvited to the wedding he is trying to stop. The mother of the bride, Nikki Newman (Melody Thomas Scott) is fed up with Billy and will tell him he is not welcome at the wedding.

Meanwhile, Y&R spoilers suggest Mariah Copeland (Camryn Grimes) will continue to ride the waves of emotion. She is excited at the idea of having a baby and will again try to convince Tessa Porter (Cait Fairbanks) to carry it. Tessa is not on board with this. After sharing her feelings with Sharon Rosales (Sharon Case), Tessa will tell Mariah she is not ready for this. Mariah will say she understands but she really does not. She will talk to Sharon and once again ask Tessa to have the baby. Mariah is obsessing and this can only lead to relationship problems with Tessa and worries about Mariah’s mental health.

Y&R spoilers tease that Phyllis Summers (Michelle Stafford) will have a bone to pick with Jack Abbott (Peter Bergman). Jack will apologize for not coming to her first about his need to talk to Nick Newman (Joshua Morrow). Jack felt for the sake of his friendship with Nick he needed to be transparent where Phyllis is concerned. Phyllis and Jack get their friendship back on an even keel. As for Nick, he will return from a trip and find Phyllis and Jack together. Seeing them in a close moment will spark his fears as to whether they are on the way to being more than friends.

During the week of October 4-8

The Young And The Restless Spoilers – Nikki Newman And Victor Newman Get Tough!

Y&R spoilers tease that someone will receive an ultimatum from Nikki Newman ( Melody Thomas Scott) . Could that someone be Billy? It seems he just will not stop pestering Victoria Newman (Amelia Heinle) and Ashland Locke ( Richard Burgi). Hopefully, the ultimatum will be enough to make Billy calm down. Victor Newman (Eric Braeden) will also try to keep Billy from attending the wedding. He will warn Billy there will be consequences if he tries to crash the affair.

Y&R spoilers say Victoria Newman (Amelia Heinle) and Ashland Locke (Richard Burgi) will travel to Tuscany and check out the wedding venue ahead of the ceremony. But there are hints that things might go left before the couple get to say their “I do’s.” It is possible, Victoria will begin to question her judgement. Why should she marry someone who cannot be honest with her? How can she marry Ashland if there is no trust in the relationship?

The Young And The Restless Spoilers – Abby Newman Has A Plan

Y&R spoilers say Devon Hamilton (Bryton James) continues to bond with Dominic Newman-Abbott-Chancellor. Abby Newman-Abbott-Chancellor (Melissa Ordway) will work out a new arrangement with him. She may want Devon to play a role that surpasses Godfather. Her husband Chance Chancellor (last played by Donny Boaz) is nowhere to be found. Abby may feel little Dominic needs a dad in his life. Will Devon become a surrogate dad?

The Young and the Restless spoilers predict several characters will face chaotic situations over the next couple of weeks.

Keep coming back for The Young and the Restless Spoilers updates and Y&R news.