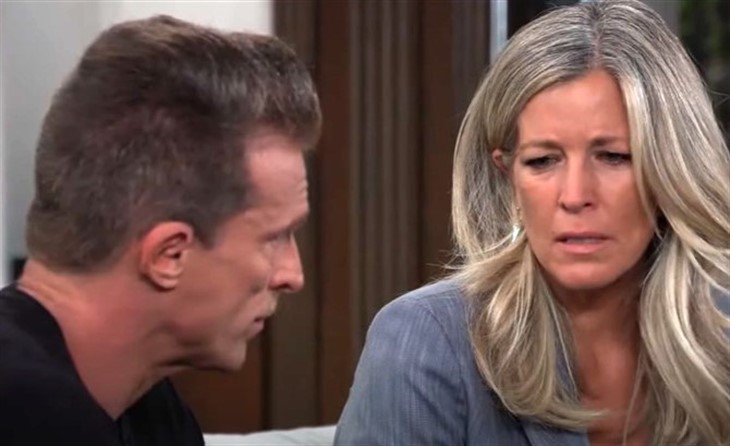 Longtime General Hospital viewers will recall that Carly and Jason were lovers before Sonny ever came to Port Charles. In recent episodes of General Hospital, viewers saw some flashbacks to when Carly and Jason were together so long ago and in love. This was before Michael Corinthos (Chad Duell) was born, and Jason took care of Michael as a baby when Carly was unable to due to postpartum depression. There were conversations of how they bonded romantically at Jake’s, which was a club that they hung out at but is no longer in existence.

According to GH spoilers, Carly recently told Jason that her old feelings for him had begun returning, and Jason had told Carly in not so many words that his had too – and that their “business arrangement” marriage would be real. But before they could consummate their marriage, Sonny showed up at the Corinthos compound, and they knew that their marriage could not be real! Jason and Carly had loved each other as lovers first, friends in between, and lovers again even though they had not physically been lovers recently.

General Hospital fans will have noticed that even though Carly should be thrilled that Sonny is alive and she has her husband back, there is sadness in her eyes when she is with Jason. Sonny hasn’t picked up on the sadness, as Carly is trying to hide it, and hide it well. She doesn’t want Sonny to know that her old feelings for Jason have come back.

General Hospital spoilers indicate that the situation now brings back memories of the situation then, when she dumped Jason, hurting him, in favor of Sonny! As time went on, the three of them became close friends, and Jason became Sonny’s enforcer, but when it first happened Jason pushed down his feelings of romantic love for Carly, because he knew they couldn’t be. Now Carly has to push down her feelings of romantic love for Jason, and agonizes over the suspicion that once again she has hurt Jason, her best friend, even though this time around the situation is much different.

General Hospital spoilers show that Jason isn’t called “Stone Cold” for nothing. Jason is good at hiding his feelings although they show in his eyes, usually, if one looks closely enough. Longtime viewers of General Hospital will recall that Jason lost a lot of his emotional capabilities when he had his traumatic brain injury – that is when he forsook the Quartermaines and all they stood for, and took his grandmother Lila Quartermaine’s (Anna Lee) maiden name.

That is also when he became Sonny’s enforcer. But over the years Jason has regained many of his emotions – so much so, that he has developed a close relationship with his stepmother, Monica Quartermaine (Leslie Charleson). Jason would never let Carly know that he is hurt by anything she has done – as he told her, since Sonny is alive, what had begun between them again simply cannot be.