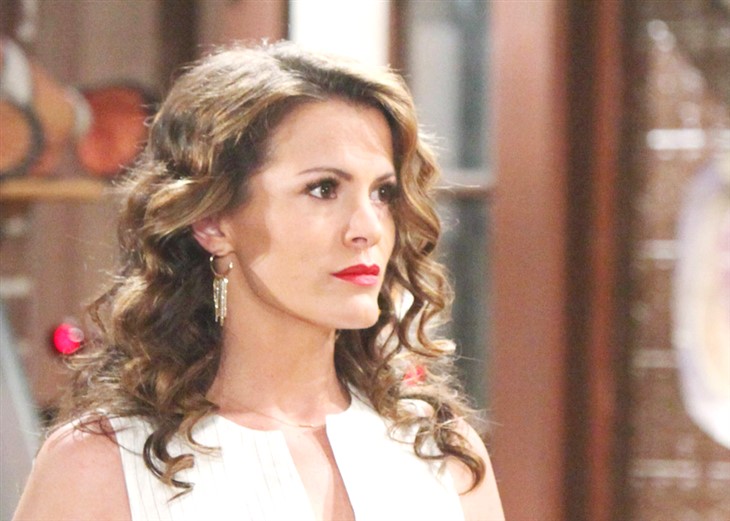 The Young and the Restless spoilers reveal Chelsea Larsen heading back to Genoa City soon now that Melissa Claire Egan is back on set taping scenes.

The Young And The Restless SpoilersB- Back From Maternity Leave

While we’ve seen Chelsea a bit over the last few months due to pre-taped video calls with Adam and Connor, we haven’t seen her in Genoa City doing what Chelsea does best — conning people and causing trouble,

Melissa Claire Egan has been on maternity leave for months after the birth of her son Caden Robert two months ago. Before that, we saw a lot of Chelsea wearing tracksuits and scrubs as the show tried to hide her baby bump. When Caden was born earlier this past summer, she shared the news on Instagram, saying: “We are overjoyed to welcome Caden Robert Katrosar into the world! Everyone is healthy and doing well, we’re so grateful for all the love and well wishes along our journey to get here. We’re awestruck by this little man and can’t believe he’s ours!”

She even gave a hint that she’d be back to work soon last week when she asked her followers what she should do with her hair. In the end, she looks like she got a lot of blonde highlights and a nice cut to start her latest stint at Y&R feeling fresh. On Monday, she made the announcement that she was back: “Chelsea’s missed you all!! Excited to be back in Genoa City soon🤗 (sans the mental hospital scrubs, good for baby bump hiding tho!) What do you think is in store for Chelsea when she returns???”

When we last saw Chelsea, she managed to get herself out of the mental hospital to take care of her mother, who allegedly broke her hip. (Do we really believe that story? After all, she learned to con from her mother, so…)

Chelsea really didn’t want Connor (Judah Mackey) to know that she and Adam (Mark Grossman) weren’t together anymore. Does that mean she’ll go after Adam once again when she returns although he seems to be moving on with Sally (Courtney Hope)? There’s also Nick (Joshua Morrow), who seems to be her consolation prize when Adam isn’t available. Might she go after him again now that his romance with Phyllis (Michelle Stafford) may be on the rocks?

Stay tuned to The Young and the Restless weekdays to see what Chelsea does.  Keep checking Soap Opera Spy for more Y&R spoilers, news, and updates.