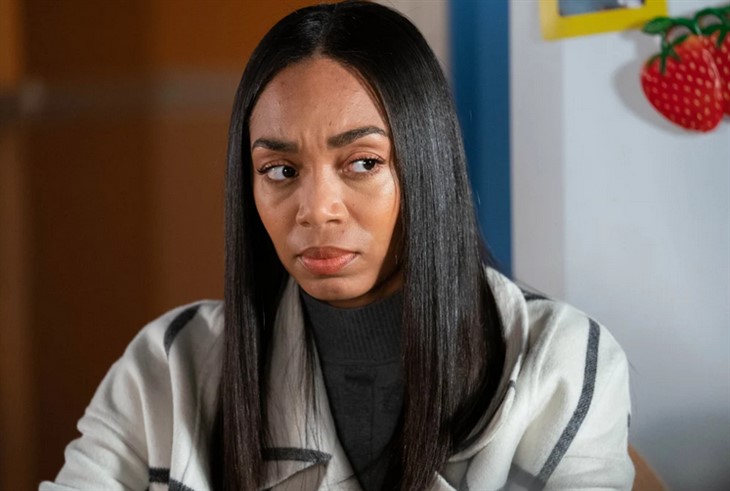 EastEnders spoilers hint that Chelsea may find herself in the midst of a baby storyline with Gray Atkins (Toby Alexander Smith) and Whitney Dean (Shona McGarty). Viewers have seen Chelsea Fox (Zaraah Abrahams) and Gray’s brief relationship with one another and their recent breakup. We have also watched as Gray showed his violent side to Chelsea as well leading to their break up and how she has warned him away from Whitney. However, it seems that Chelsea may find herself tangled up with Gray once again as a baby storyline is hinted at.

Chelsea recently found her way out of a relationship with Gray Atkins. After the two began dating, they ran into some issues. Chelsea being more of a free spirit and Gray having a temper would only lead to the two of them clashing with one another. As Chelsea started to see a different side of Gray as he began to have an outburst in front of her. The most recent outburst made her decide to end things with him for good. However, she does not know just how far his outburst has gone or just how dangerous he can be. As viewers know, he has murdered on many occasions as well as abused Chantelle when she was alive. However, she does understand that he is not the same person that he pretends to be.

In upcoming episodes, Chelsea will be shown looking nervously at a pregnancy. In a scene that follows, Chelsea will try to open up to her mother, Denise Fox about the results of the test. However, she decides against doing so. As for Gray, he tells Whitney that he regrets ever getting involved with Chelsea which only makes her feel a little conflicted about the situation. She does not care for the horrible way he is speaking about Chelsea.

She later ask to speak to Chelsea and ask her questions about if she was pregnant, it looks like Whitney has noticed that Chelsea might be pregnant. Chelsea is shocked by Whitney but does not end the conversation there, instead, the two’s friendship starts to blossom. Whitney is still curious about if Chelsea is pregnant with Gray’s child. Will she decide to ask again?

Be sure to catch up on everything happening with Corrie right now. Come back here often for Eastenders spoilers, news, and updates.

Days Of Our Lives (DOOL) Spoilers: The Devil Makes Marlena Do It…Again