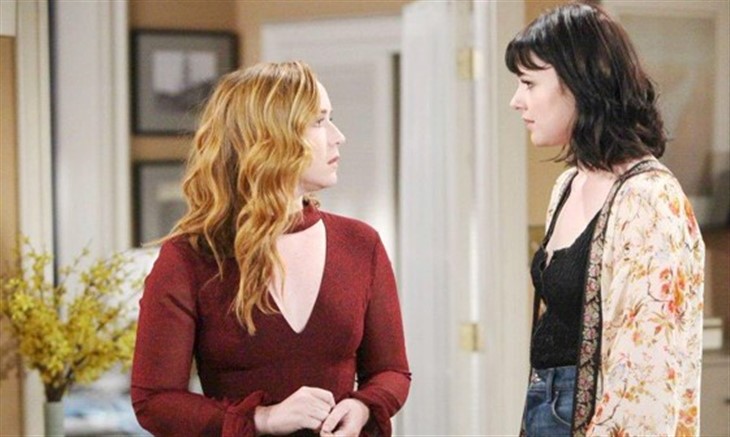 Viewers of The Young and The Restless will find that time apart hasn’t solved any problems for Tessa and Mariah. Mariah had stayed home from Victoria Newman (Amelia Heinle) and Ashland Locke’s (Richard Burgi) wedding in Tuscany, Italy even though she had been invited.

Tessa had sung at the wedding, with Leslie Brooks (Janice Lynde) as the pianist. Mariah had stayed home for the unhealthiest of reasons – fans will recall that she had become much too attached to Dominic Chancellor (uncast infant) the baby she carried for Abby Chancellor (Melissa Ordway). She even continues to call him “Bowie” the name she used before she gave birth to him. Mariah had stayed home because the baby had the sniffles – going along with Tessa to Tuscany probably would have been very therapeutic for her, but she refused! As for Tessa, missed Mariah even as she reconnected with her former boyfriend, Noah Newman (Rory Gibson) who was there for his Aunt Victoria’s wedding!

Viewers of The Young and The Restless will remember that a rift started coming between Mariah and Tessa when Mariah insisted it was time for the two to have a baby! The doctors had told Mariah not to become pregnant again for at least a year, and she doesn’t want to wait that long! Therefore, as viewers of The Young and The Restless know, she was very insistent that Tessa carry their baby!

It would likely be Tessa who would be artificially inseminated if she were to make that decision, but Mariah wants a baby of “her own” so bad that she may insist on being an egg donor for Tessa to be the surrogate! That would only cause even more problems between Tessa and Mariah, because Tessa is simply not ready! She had agreed that she wanted a family – someday – but not in the near future, and certainly not now! Tessa’s career has been taking off and it’s difficult to be a touring singer and be pregnant at the same time!

Y&R spoilers show Tessa come home to the same old argument – Mariah will push for them to start a family and for Tessa to carry the baby! Viewers of The Young and The Restless will recall that Tessa felt lonely for Mariah and rather disconnected from her. They could have had fun together at the wedding dancing all night at the reception. Tessa wanted her to be there and instead she had cried on Noah’s shoulder, telling him how she felt shut out and that she didn’t know what to do. She told Noah about Mariah’s captivity and their disagreement on timing of babies.

But Mariah seems obsessed with starting their family right now, and won’t listen to reason. Tessa guilt trips herself for resenting baby Dominic deep down, but it’s like he’s competing for Mariah whether Mariah realizes it or not. Tessa fears she will drive her partner away if she confronts her with what she knows is the truth – you can’t replace a human being with another human being any more than a new puppy or kitten will replace one you’ve lost in your heart. Tessa again considers trying to force therapy on Mariah, but she knows it will drive the wedge between them even deeper!