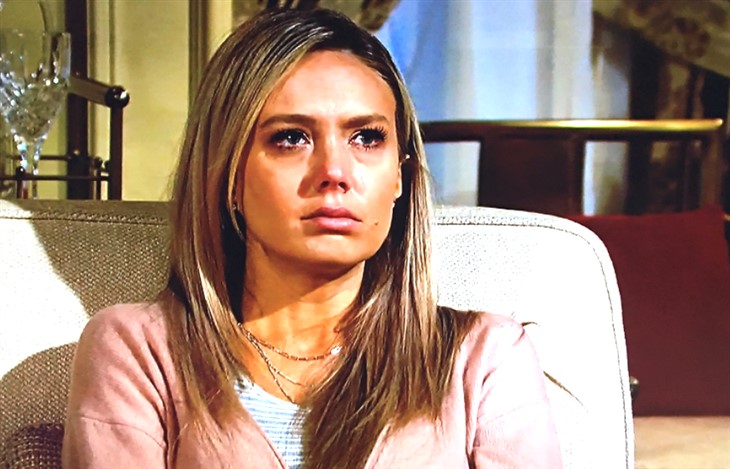 The Young and the Restless spoilers document that Abby Newman Abbott Chancellor (Melissa Ordway) has been living a topsy-turvy existence in 2021. On the upside, she was newly married to the love of her life. On the downside, her husband left without saying goodbye and has been on a secret mission for the Agency since the start of February.

To think that three weather seasons have passed since Donny Boaz’ (Philip Chance Chancellor IV) stunning cast exit is rather sobering. The passage of time reinforces the reality that a well-liked cast member, who had good chemistry with his on-screen partner (Ordway) was written off for inexplicable reasons.

Whether the Boaz subtraction was related to budget cuts or is reflective of the standard soap grind, where characters come and go, is hard to tell. But teasers indicate that Abby learns some news about Chance in the coming days.

The Young And The Restless Spoilers – Christine Williams’ Reappearance

Lauralee Bell (Christine Williams) is a legacy character. The actor is also the daughter of the show’s co-creators, the late Bill Bell and the late Lee Phillip Bell. Chance’s first name, Phillip, is Y&R’s ode to Lee.

Her brother, Bradley Bell, is the executive producer and head writer of Y&R’s sister show, The Bold and the Beautiful. Their parents co-created that steamer as well.

Due to her status, Lauralee Bell does not need to work. But her fondness for this soap and her place in its history, with Christine being a legacy character, means recurring appearances. So, Cricket returns with news for Abby.

The last Abby heard from Chance he still had no idea when his Agency assignment would end. He was said to be deep undercover.

Eventually, Abby lost touch with Chance. Abby’s husband has not learned that Dominic Phillip Newman Abbott Chancellor (no baby actor known to be cast for this role) was born. That is terrible, both on-screen and as part of this storyline.

Whatever update Christine provides to Abby needs to be definitive. He is wrapping the case or will be out of the area for a certain number of months. This storyline has been confusing and confounding. Hopefully, Cricket can wrap it tightly.

The Young And The Restless Spoilers – Moving Forward In GC

All indications signal that Abby will be moving on without Chance unless a surprise return by Boaz is in the works. A recast was said not to be happening, but adjustments are regularly made in the world of daytime.

Abby and Devon Hamilton (Bryton James) have been friends for a long time. Devon is Dominic’s biological father and his godfather. It would make sense to have Abby and Devon bond. He is in love with Amanda Sinclair (Mishael Morgan), so a triangle could be formed.

If not Devon, then another guy must be written into Abby’s life. She is far too impressive to remain alone forever. Chabs was great and be great again. If not, then Abby and the fans deserve something else this fall and no later.