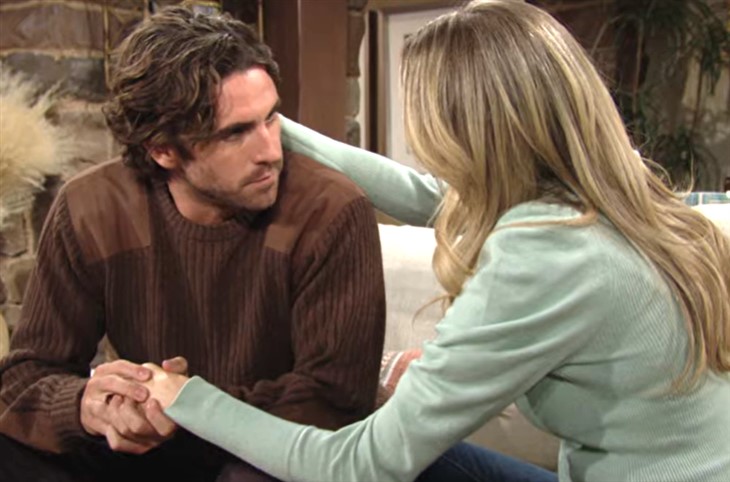 Viewers of The Young and The Restless can tell that Chance is trying to hide his struggles from Abby Chancellor (Melissa Ordway) who pretty much forced him to come home from Majorca, Spain where she found him with friends. Chance had been pressed by his sense of duty to continue to chase after those responsible for bombing his safe house in Valencia, Spain and killing his entire team and bring them to justice.

He had noted to Abby, as viewers of The Young and The Restless will recall, that he had recognized one of them. Chance carries a huge load of survivor’s guilt, but possibly some post traumatic stress disorder symptoms as well, as Victor and Nikki Newman (Eric Braeden, Melody Thomas Scott) had noted at his welcome home party. Ashley Abbott (Eileen Davidson) had also noticed something off, and Victor had determined they should keep an eye on Chance.

Viewers of The Young and The Restless will recall that Ashley, Victor and Nikki weren’t the only ones who noticed Chance was struggling. Devon Hamilton (Bryton James) noticed him having some anxiety symptoms, acting like his turtleneck sweater was getting a little too tight around his neck and interfering with his breathing! After talking about baby Dominic Chancellor (uncredited infant actor) and other subjects, Chance seemed to calm down a little bit although Devon encouraged him to talk if he needed to.

Chance had thanked him and went back into the party, and viewers of The Young and The Restless will have noticed he still seemed kind of off even though he made a short speech. Chance is having a hard time being thought of as a hero when he feels he failed! There is a distinct possibility that he will continue to have nightmares of the bombing, and those nightmares may develop into flashbacks!

The Young And The Restless Spoilers – Chance Has Been In Danger Before, But Never Experienced The Loss Of Team Members

Longtime viewers of The Young and The Restless will remember Chance has been in danger before, and on many dangerous missions during his years as an FBI agent, and working for the Pentagon and the state department. Chance has even faked his death before in connection with missions he had been involved in. But what makes this mission different is that in all his years in this type of work, as longtime viewers of The Young and The Restless know, Chance has never failed his men or witnessed the loss of a team to death.

This makes this mission a whole different experience for him, and one that he is not coping with very well emotionally. This enemy is different; and in a way, it’s an enemy within! It wouldn’t be the first time that people close to Chance have dealt with someone with PTSD, however; longtime viewers will recall that Nikki’s son with Paul Williams (Doug Davidson), Dylan McAvoy (Steve Burton) also suffered with PTSD from being in combat. Sharon Rosales (Sharon Case) was married to Dylan before he left; perhaps Nikki and Sharon will be the best ones to help Chance.

Days Of Our Lives Spoilers: Parents Trapped-Allie Tries To Get Lucas And Sami Back Together