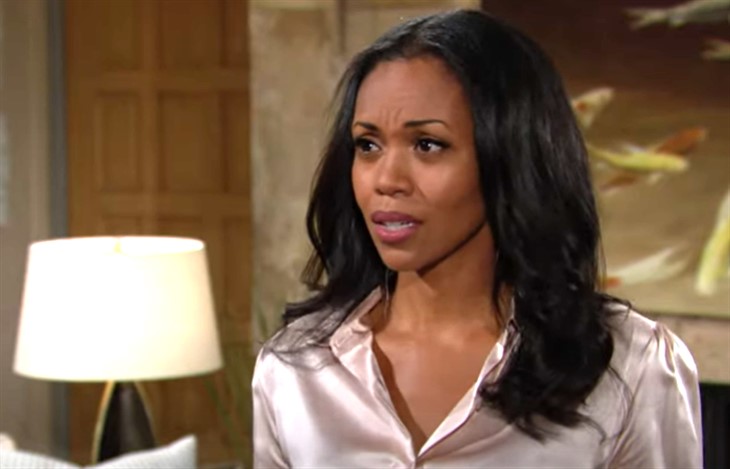 The Young and the Restless spoilers document that Amanda Sinclair (Mishael Morgan) admitted she is seeking vengeance against her grandfather. Sutton Ames (Jack Landron) was secretly recording Amanda when she vehemently acknowledged her intention.

Amanda was in the process of telling Sutton to get out of the penthouse when Devon Hamilton (Bryton James) came home. He loudly asked what was happening, and then Amanda appeared to outwit Sutton.

Sutton was caught trying to record Amanda. So, it looked like she stopped his plan to gain evidence that could be used to prevent her from testifying against him. But he did gain the answer that he wanted.

The Young And The Restless Spoilers – Richard Nealon’s Death Avenged?

Did Richard Nealon (no actor’s name known for this retrospective role) die because of Sutton’s actions? While the evidence is not conclusive, Sutton’s role in that matter would likely be seen as problematic in a courtroom.

But the truth is that Amanda does not know what happened more than thirty years ago. She is bitter about her childhood being robbed, never getting to know her identical twin sister, Hilary Hamilton (Morgan), and her mother’s choice to give the twins up for adoption.

Amanda has come to place blame on Sutton for all real and perceived wrongs.

As devoted viewers recall, Sutton initially claimed to be wrongly accused. He brazenly convinced Amanda to represent him before she determined what seems to be the reality in this sorry family matter.

While still holding himself harmless for Richard’s death, Sutton knows that his legal fate projects badly. So, he is imploring Amanda to offer compassion.

It could be that whatever Michael Baldwin (Christian Le Blanc) asserts or Amanda testifies to will not have a strong enough effect to result in a conviction. So, then what?

The Young And The Restless Spoilers – What If Amanda Sinclair Loses?

Amanda feels that testifying will yield the expected outcome. Sutton will be found guilty and then sent to prison for the rest of his life.

The law is implemented by human beings and is therefore subjective. So, justice is not served in every instance.

Richard appears to have been killed rather than having died in a car accident. But Sutton could take the valuable information he gained at the penthouse and use it to undercut Amanda’s credibility just enough to avoid prosecution.

The above scenario would be dramatic and enable Landron’s intriguing character to remain on the show. Otherwise, Sutton is doomed.

Days Of Our Lives Spoilers: Rafe And Nicole Keep A Secret From Ava Vitale!