Days Of Our Lives Spoilers: Rafe And Nicole Keep A Secret From Ava Vitale! 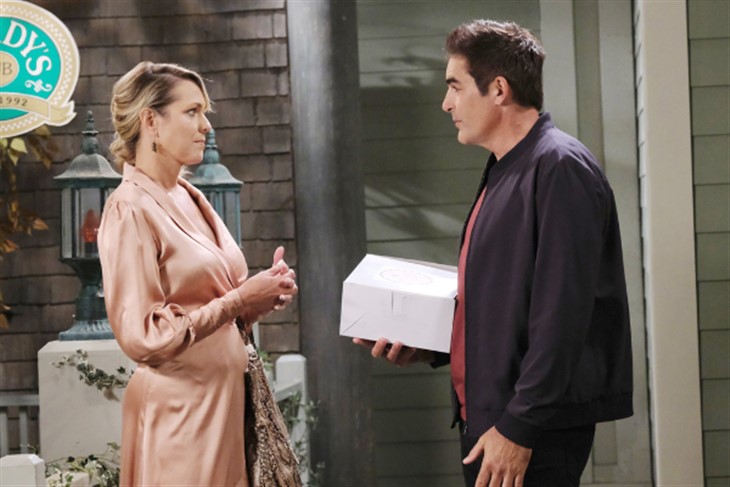 Days of Our Lives Spoilers tease that after being terrorized by an undead Deimos Kiriakis (Vincent Irizarry), a traumatized Nicole Walker (Arianna Zucker) called Rafe Hernandez (Galen Gerring). One thing led to another and the two made love on the Basic Black boardroom table. Rafe had just found a dead body in his own house, that of Carmine Merlino (Richie Stevens). He was upset that Ava Vitale (Tamara Braun) may have been involved, and that she hadn’t cut all of her ties to the mob.

Although Ava didn’t kill Carmine, it will be a hard sell to get anyone to believe who the real killer was. Deimos wasn’t the only undead resident of Salem to return that night. Ava’s son, Charlie Dale (Mike Manning) also arose and killed Carmine right in front of Ava. If this were anywhere but Salem, no one would ever believe Ava. But since Deimos and Nick Fallon (Blake Berris) were also seen around Salem, Ava may get a pass. But Ava isn’t completely innocent.

Ava was hellbent on taking over Gabi Chic from Gabi Hernandez (Camilla Banus), so to that end she contacted her former associate, Carmine, from her days as a mob boss in Philadelphia. But Ava can talk her way out of trouble, then Rafe may have no choice but to believe that Ava is innocent. Which means that he won’t break up with her, despite his indiscretion with Nicole. Look for both Nicole and Rafe to convince themselves that their hook-up was a mistake.

Rafe hates lies, but Nicole will convince Rafe that Ava needs him. She can never know what they did. Because if Ava finds out, she might go back to the mob and then they could both be in danger! So for now, look for Rafe and Nicole to keep their lovemaking a secret at least until Rafe can figure out how to let Ava down easily. But secrets always come out in Salem.

Can Ava talk her way out of trouble? Will she reconcile with Rafe? And can Rafe and Nicole keep what happened between them a secret? Literally anything can happen in Salem, so stay tuned to Days of Our Lives airing weekdays on NBC. And don’t forget to check back right here regularly for all your Days of Our Lives news, information and spoilers!