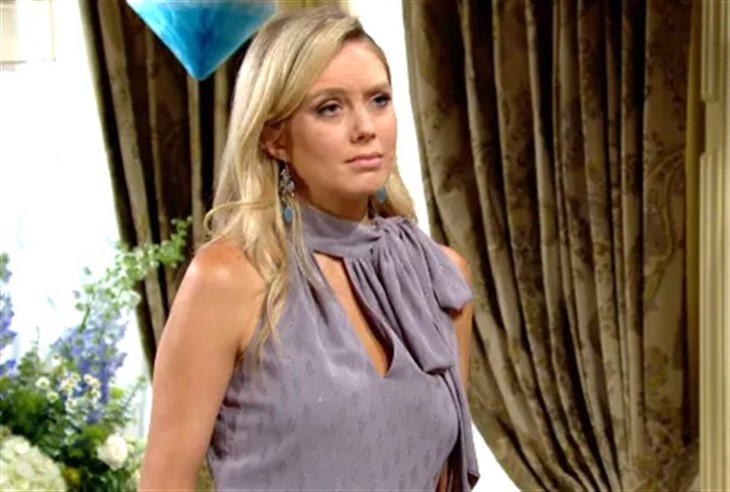 Viewers of The Young and The Restless will recall that Abby can hardly handle things any more, her grief is wearing her down so much! Even though she tells family and friends she has accepted the death of her husband Chance Chancellor (Conner Floyd) she still believes strongly in her heart that he is alive! Abby cannot accept his death, but then her family and friends tell her that denial is one of the first stages of grief!

Viewers of The Young and The Restless will recall that Abby was very upset with herself when she took that tranquilizer and slept through her baby Dominic Chancellor’s (uncast infant) cries, even though grandma Nina Webster (Tricia Cast) had been there and was holding him when Abby woke up. Abby had intended to use the Newman Jet to fly to Spain herself and look for Chance, but was advised against it and talked out of it. In the meanwhile, she knows her baby needs her and because of her grief, she’s not as available to him as she knows she should be.

Abby explains she needs them to watch him until she’s stronger – and it’s for the baby’s good. Viewers will recall that Devon has had some concerns whether Abby’s grief was impacting the baby in a negative way – he seems to be the only one who can calm him down when he cries at times. No doubt, Abby has not come to this decision easily and it is not one she is taking lightly. She just knows she is going through things that are upsetting her baby and she cannot hide it; and if she was going to leave him with anyone, it has to be Devon.

The Young And The Restless Spoilers – Abby Chancellor Books A Motel

Viewers of The Young and The Restless will see Abby return to the Chancellor mansion, pack a bag and leave. She just needs to get away and clear her head, and get some time to herself to really think. Viewers of The Young and The Restless can understand that she is tiring of her mother and father and mother in law all hovering, and seeing their very real looks of concern. She appreciates them and their love and compassion, but the “poor Abby” looks she’s getting are only making her feel worse! Abby books a motel – definitely not the Grand Phoenix where everyone knows her. She needs space, and she is determined to get it.

One thing she brings with her is a box, a keepsake box where Chance had stored some things. She empties the box and goes through the contents, knowing they are important to Chance. There are photos from his armed forces days with troop mates in Iraq, his medals, and mementoes from other situations that he had told her about previously. She puts these mementoes together like a puzzle in her mind, it being somewhat weird for her because they represent parts of his life that he had not told her about as well. Abby is discovering parts of Chance she never knew by looking through his mementoes, and then she spots something that triggers some memories for her! It’s a big enough revelation that she thinks she might be onto something, and she starts out on a whole new journey because of it!