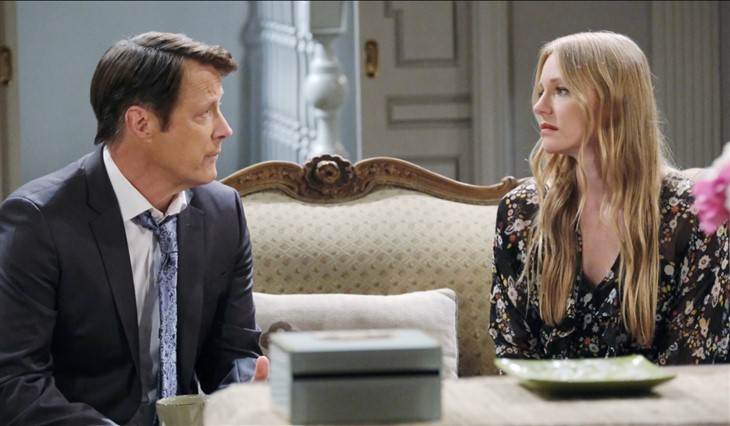 Days of Our Lives spoilers reveal that Abigail DiMera (Marci Miller) has empathy for her father. Jack Deveraux (Matthew Ashford) made a big decision regarding Gwen Rizczech (Emily O’Brien). Despite everyone suffering due to Gwen’s vengeful actions, Abigail feels bad for Jack. Abigail could make an unexpected and gracious move.

DOOL spoilers reveal that Gwen is a woman of many secrets, lies and manipulations. Even though she tried to be good when Jack invited her to live at the Horton house, she once again found herself in a terrible scheme. Instead of just telling Jack the truth from the beginning, she had to tell multiple lies to cover up the miscarriage truth.

When Abigail returned to Salem, she suspected that Gwen lied to Jack. Abigail just didn’t believe that Gwen would keep an escort past a secret and allow Dr. Clay Snyder (Michael Lowry) to blackmail her with it. After all, Gwen has done much worse and actually bragged about it.

Abigail and Chad DiMera (Billy Flynn) found out the truth when Kayla Johnson (Mary Beth Evans) allowed them to search Dr. Snyder’s office. “Chabby” went straight to Jack and exposed the truth. Even though Gwen felt bad about the lie, she had many opportunities to come clean but just kept spinning more stories. Understandably, Jack is furious and has made a decision regarding his relationship with Gwen.

Days of Our Lives spoilers reveal that on Thursday’s episode, Abigail held her father as he cried. Abigail can’t stand Gwen and has suffered because of the manipulator. However, Abigail loves her dad and can’t stand to see him hurting. Abigail’s face clearly showed her empathy and it could compel her to make an unexpected decision.

It is teased that Chad and Abigail will leave the past where it belongs – behind them. At the same time, it seems that Abigail could make a gracious and merciful move. It’s possible that Jack and Gwen will once again reunite and work on their relationship. It won’t be Jack’s doing or even Gwen’s, though. It will be Abigail that brings the father and daughter back together.

Perhaps in time, Abigail and Gwen might be able to forge some sort of truce or civil relationship. After all, stranger things have happened in Salem! What do you think is in Gwen, Abigail, and Jack’s future? How could Gwen earn redemption? Let us know what you think and remember to keep watching the NBC soap to find out what happens next.