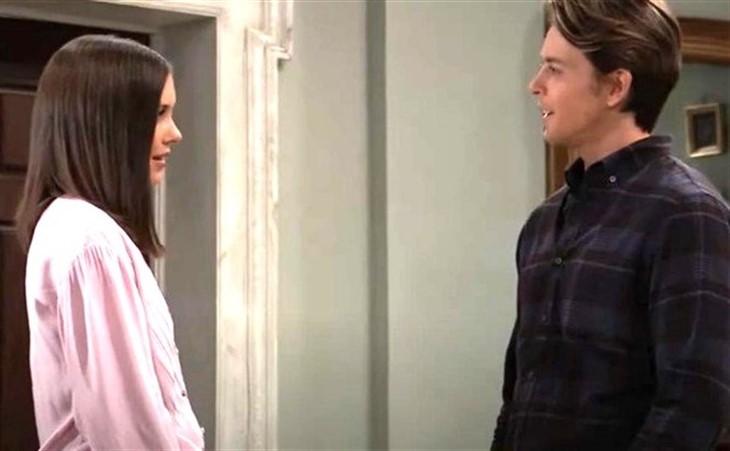 General Hospital spoilers reveal Willow continuing to live in the Quartermaine guest house while raising Wiley with Michael Corinthos, but unsure if this is the life for her. And she should be.

Yes,;) she does want to marry him, but not just yet. After all, she was already married to him, then they annulled their marriage when they learned Sasha Gilmore (Sofia Mattsson) and Harrison Chase (Josh Swickard) did not have an affair after all, and then Willow married Chase when she thought he would die although she was in love with Michael by then. Now that her marriage to Chase is over, Willow might be starting to see Michael in a new light.

Willow has also given up much of herself to take care of Wiley, a child she thought she gave birth to before learning her baby had died and been switched with Michael’s son Wiley. She was a teacher and gave that up. Then, she went to nursing school and that seems to have fallen by the wayside too. So, who is Willow Tait except the woman raising Michael’s child while he works and does nefarious things behind her back?

When Willow learned that Michael had bribed a Pennsylvania politician to arrest Nina Reeves (Cynthia Watros) for a crime she didn’t commit (not telling an amnesiac his name is not identity theft), she was horrified that he would do such a thing when they had agreed to leave well enough alone with Nina.

Michael’s solution to Willow’s anger? Get down on his knees and propose on the fly, without a ring or without any real plan. We cheered Willow when she rejected him, but then wondered what she was thinking when she insisted whatever Michael does all day has to be much more important than anything she does.

What? Where has the feisty third-grade teacher gone who escaped a cult and then stared down the cult leader and declared her independence? It’s like Michael already killed her. Remember Sabrina (Teresa Castillo) and Nelle (Chloe Lanier), among others. Most of his girlfriends die and Willow needs to run far away before her body goes the way of her soul — killed by Michael Corinthos’ brand of love. Stay tuned to General Hospital weekdays to see if Willow wises up.