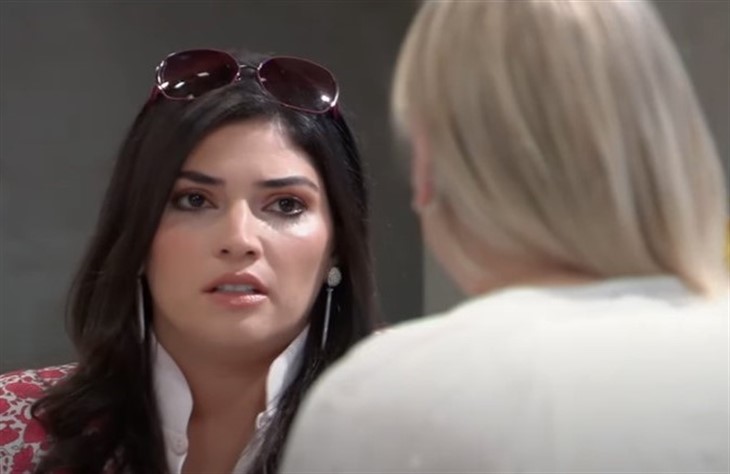 General Hospital (GH) spoilers for Wednesday, November 3, 2021, reveal a pause in time on Cassadine Island to bring us back to Port Charles where we can see people who were on Cassadine Island last week. We also see Maxie Jones and Brook Lynn Quartermaine needing to revise their plans.

Maxie (Kirsten Storms) and Brook Lynn (Amanda Setton) had settled into a nice little arrangement where Maxie’s baby gets to hang out at the Quartermaine house with all of the other kids in Port Charles and Brook Lynn gets to pretend to be the baby’s mother. Just until Peter August (Wes Ramsey) is caught, which nobody can seem to do — even that expert marksman Jason Morgan (Steve Burton).

Now, all of that has blown up in their faces because Gladys (Bonnie Burroughs) knows that baby doesn’t belong to Valentin (James Patrick Stuart). However, Gladys doesn’t know that Bailey Louise doesn’t belong to Brook Lynn either and they need to keep it that way. To that end, they devise a whole new plot to keep Gladys quiet. How much money will this involve?

As for Valentin, he just wants Anna Devane (Finola Hughes) to bring him Victor Cassadine (Charles Shaughnessy) because they still have a lot of talking to do.

Remember right before last Christmas when Sonny Corinthos (Maurice Benard) chased Julian Jerome (William deVry) onto a rickety bridge in Secaucus, NJ after Cyrus Renault’s (Jeff Kober) goons chased both of them. That’s pretty much how Sonny ended up spending nine months in Nixon Falls, but Carly (Laura Wright) seems to forget that.

On Wednesday, Sonny and Cyrus have a face to face meeting in prison when Sonny pays him a visit. Does Cyrus bother telling Sonny that Carly kidnapped his elderly mother from her nursing home? We wonder how Sonny would feel about that.

General Hospital Spoilers – A Night Out At The Savoy

Carly Corinthos and Olivia Quartermaine (Lisa LoCicero) are apparently sick of their own hotel, restaurant, and bar so they visit Curtis Ashford’s (Donnell Turner) new place for a girl’s night out. When Nina Reeves (Cynthia Watros) shows up, Carly asks her how she has the nerve to show her face there. Does someone need to remind Carly she doesn’t own this club?

Elsewhere at The Savoy, Portia (Brook Kerr) voices her concerns to Elizabeth (Rebecca Herbst) about the man who has been following members of the Ashford clan around. Stay tuned to General Hospital weekdays to see how these stories play out.