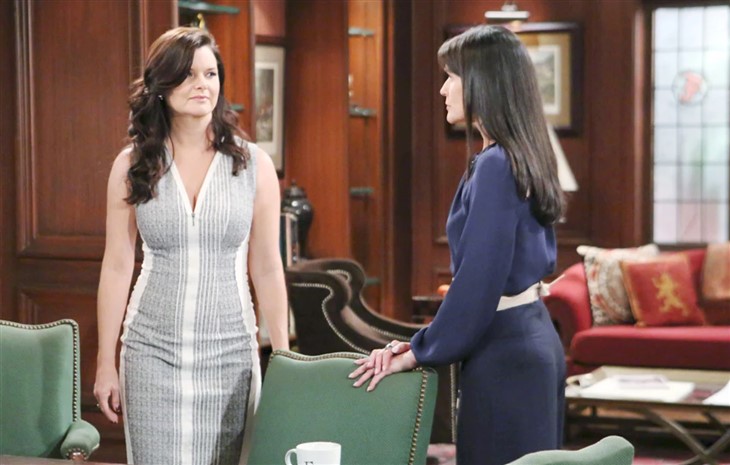 The Bold and the Beautiful (B&B) spoilers document that Quinn Fuller (Rena Sofer) thought she was being noble. Returning to Eric Forrester (John McCook), despite his condition, demonstrated devotion and selflessness. Then, the mansion’s roof fell on her.

Eric’s condition resolved itself, but there is a caveat. Donna Logan (Jennifer Gareis) was the reason Eric rediscovered his passion. Nothing happened between the one-time married couple that was known as Deric. However, Quinn jumped to that conclusion because of Quarter.

Meanwhile, Carter Walton (Lawrence Saint-Victor) is developing a fast, fond friendship with Katie Logan (Heather Tom). She has never been a Quinn fan and soon will be revealed as the next enemy of Sofer’s character.

The Bold And The Beautiful Spoilers – Yesterday Seems Mild Now

Eric has a reputation. He forgave what others would not have in many past instances.

Hardcore viewers recall that Quinn became involved with Ridge Forrester (Thorsten Kaye) years ago. They flirted and kissed. Eric was crushed and cut Ridge out of his life for a short time. But then all was eventually forgiven.

The brief Quidge scenario was nothing as compared to Quinn falling in love with Carter. Eric held himself responsible for that happening because he froze Quinn out due to the hidden ED issue. But that was nothing when compared to Quarter’s recent emergence.

Quinn managed to work her way back into Eric’s life. Bridge thought that was not possible.

Brooke Logan Forrester (Katherine Kelly Lang) and Ridge were relieved when Eric was pushing for a quick divorce and wanted Quinn out of Forrester Creations by intending to end the jewelry line. Carter slow-walked the first request and talked Eric out of the second.

With Quarter gone, Eric was optimistic about the future. But Eric did not see Quinn in the same light. Donna, on the other hand, was a total delight.

So, how does Katie work into this drama? Well, Carter has moved on.

Quinn’s most recent conversation with Carter had her telling him they were over. He was crushed. Then, Katie banged on his door and began to scold him.

Carter was open, telling Katie that he fell in love with Quinn. Katie’s opinion was transformed, and Karter gained realistic momentum.

Quinn will know when Eric ends Queric, as is teased to happen. That will send her back to Carter, with the Katie news dropping. The boom will be Quinn realizing that she lost two men.