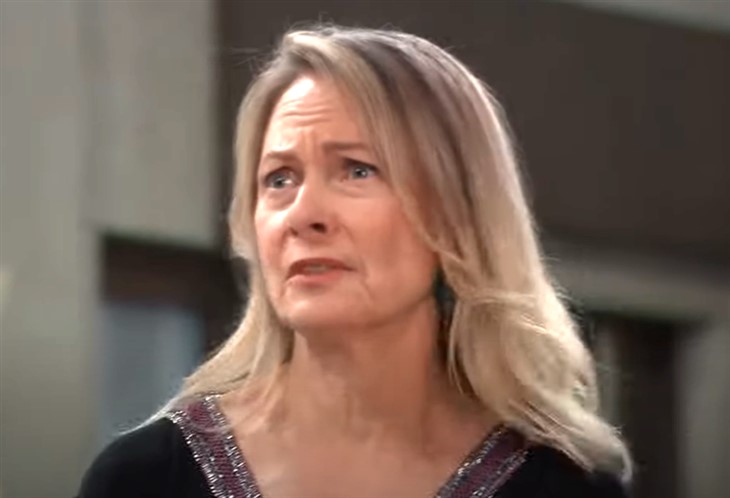 General Hospital spoilers tease that Gladys Corbin (Bonnie Burroughs) has a problem with boundaries. And now, thanks to Brook Lynn Quartermaine’s (Amanda Setton) big mouth, Gladys is in possession of some information that could ruin lives, and bring danger to a few key Port Charles residents. Bur Gladys only knows part of the story, and if she decides to take matters into her own hands, it could mean Maxie Jones (Kirsten Storms) and her baby face the wrath of Peter August (Wes Ramsey).

What Gladys overheard was that Valentin Cassadine (James Patrick Stuart) isn’t the father of Brook Lynn’s baby. And while that is true, there is much more to the story. The baby that Brook Lynn has passed off as her’s and Valentine’s is actually Maxie Jones’ (Kirsten Storms) baby and not Brook Lynn’s. Brook Lynn is raising Maxie’s baby in order to protect the little girl from the baby’s father, Peter. If Peter gets wind of his daughter’s whereabouts, he will certainly come for both the little girl and Maxie. And he may even decide to kill Brook Lynn for her deception.

Gladys is probably the worst person in Port Charles (besides Peter) to give such sensitive information. But the damage is done and if Maxie and Brook Lynn don’t tell Gladys everything, there is nothing to stop her from running to Valentin! But Gladys is personally aware of how dangerous Peter is, so there is a chance that she will be a help instead of a threat! But Gladys loves money more than anything else, so look for her to demand a large payout in exchange for her silence.

Brook Lynn will likely see no option but to pay Gladys in exchange for her silence. But Gladys may try to double cross Brook Lynn and intend to tell Valentin anyway. She is a loose cannon and someone may very well take the opportunity to shut Gladys up for good. Brook Lynn is many things, but a murderer isn’t one of them although she may look guilty enough to once again be arrested by Harrison Chase (Josh Swickard). If that does come to pass, look for Chase to make it his business to find out who actually killed Gladys. Both Sasha Gilmore (Sofia Mattsson) and Peter August (Wes Ramsey) will both be under suspicion. But Cyrus Renault (Jeff Kober) still has an ax to grind with Gladys and may take the opportunity to finally put a hit out on Gladys. Either way, this might be the end for Brando Corbin’s Johnny Wactor) mother!

Will Gladys see dollar signs when she learns Brook Lynn’s secret? Will Maxie come forward and tell Gladys the whole story? Or will Gladys try to make an easy buck? Blackmail is always a motive for murder in Port Charles, so stay tuned to General Hospital airing weekdays on ABC. And don’t forget to check back right here regularly for all your General Hospital news, information and spoilers!