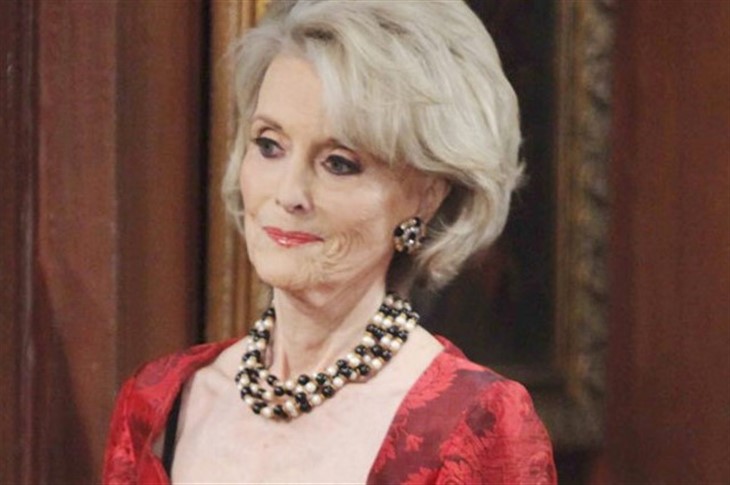 General Hospital villainess, Helena Cassadine (Constance Towers), has been around for decades. Who plays Helena? Do you believe she will come back from the dead?

General Hospital’s Helena is returning in some capacity for a short time at least. Constance has held the role of Helena on and off since 1997. Helena was declared dead a few years ago after Nikolas Cassadine (Marcus Coloma) poisoned her with her tea. How did Constance get the role? Towers was a popular actress in both television and film before taking over as Helena in 1997.

She had a nine episodes stint on Sunset Beach before getting the role of Helena. Towers does have this to say about being offered the role of Helena. “When I was offered the part, I went to my drama coach and said, “I don’t know how to do this. I’ve always played the purest heroine.” … But my character is over the top. So I went over the top. And it was so successful. I enjoy her.”

When Helena was first introduced to the General Hospital audience, Elizabeth Taylor played the role. “A fan of the series and wildly popular supercouple Luke Spencer and Laura Webber (Anthony Geary and Genie Francis), Taylor once said that someone from General Hospital came to see her while she was doing “The Little Foxes” and asked her to appear on the show. She was cast as Helena, the vengeful widow of villain Mikkos Cassadine (John Colicos), who had died at the climax of that summer’s popular “Ice Princess” storyline.

Arriving on the canvas on November 10, 1981, Mrs. Mikkos Cassadine sends her Emissary to all the prominent citizens of PC with invitations to attend a reception she is giving. Luke and Laura’s November 16, 1981 wedding, featuring Taylor’s Helena, was watched by 30 million viewers and remains the highest-rated hour in American soap opera history. Taylor’s last appearance as Helena aired on November 19, 1981.”

General Hospital – A Force To Be Reckoned With

No matter who is playing Helena, she has proven herself to be a force to be reconnected with. Helena has been a thorn in the Spencer family’s side for years. Helena even faked an accident to steal Luke’s grandson and raise him on Cassadine Island for five years. Helena has always been a ruthless character and if she returns she will be looking for revenge against Nikolas. Who will save Nikolas from his not-so departed grandmother then?

Chances are that Helena will show up in a flashback or a dream sequence but who knows, Helena may be alive after all.