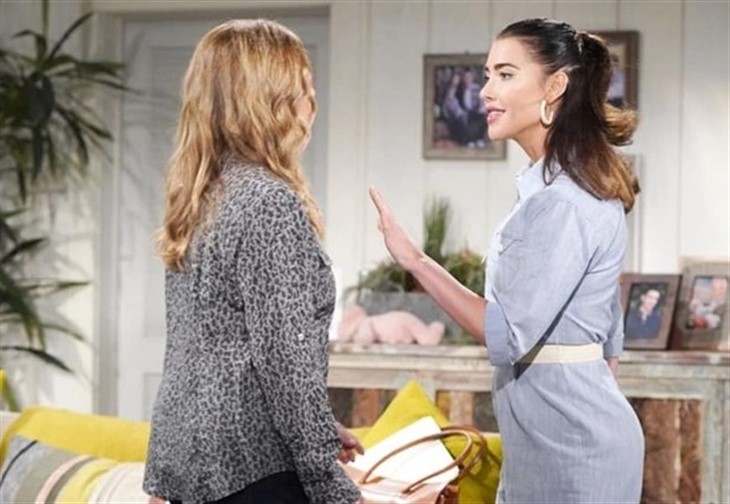 The Bold and the Beautiful (B&B) spoilers for the week of December 20 reveal that Taylor Hayes (Krista Allen) will make a shocking request. As we previously speculated, Taylor will be paramount in helping Sheila Carter (Kimberlin Brown). Taylor actually suggests that Steffy Forrester Finnegan (Jacqueline MacInnes Wood) invite Sheila over to celebrate Christmas.

The Bold And The Beautiful Spoilers – Steffy Forrester Finnegan’s Stance

B&B spoilers reveal that Steffy absolutely will not bend or compromise when it comes to Sheila. At least, that is what is happening right now in the CBS soap. Steffy believes that Sheila is and always will be a threat to her family. Despite Sheila now being her mother-in-law, Steffy refuses to let her get near John “Finn” Finnegan (Tanner Novlan) or Hayes Forrester Finnegan.

As we previously speculated, Sheila could turn to Taylor for help with Steffy. Sheila is a desperate woman who will do anything to get access to her son and grandchild. Despite their volatile history, Taylor might agree to listen to what Sheila has to say. Sheila must say something convincing because it is confirmed that Taylor actually goes to bat for the villain.

The Bold And The Beautiful Spoilers  – Taylor Hayes’ Shocking Request

The Bold and the Beautiful spoilers reveal that Taylor makes a request that sends Steffy reeling. According to On TV Tonight, the television listings state that on Thursday, December 23, Taylor suggests that Steffy invite Sheila over to celebrate Christmas with the family. Taylor better has a really good reason for this and it will be interesting to see what it is when the episode airs.

During multiple interviews, actress Kimberlin Brown keeps saying that Sheila really has changed this time. The actress also has mentioned that Steffy’s memory of what happened with Taylor isn’t accurate. So, when Sheila and Taylor encounter each other, could there be some rewriting of history? Will Taylor be written to have been the true villain instead of Sheila?

Despite Steffy’s strong feelings about Sheila, Taylor ends up getting her way. Of course, Finn probably has a hand in that. It is teased that on Friday, December 24, Steffy and Finn’s family Christmas includes Taylor, Thomas Forrester (Matthew Atkinson), Kelly Spencer (Colette and Avalon Gray) and Sheila. In fact, Sheila expresses her heartfelt gratitude to Taylor. Is this a new beginning for Sheila or will Steffy regret being talked into this?

What do you think of Taylor asking Steffy to invite Sheila over for Christmas? What will happen when Sheila joins “SINN” for a family holiday? Tell us your predictions and remember to keep watching the CBS soap to find out what happens next.

GH Spoilers: Baby Liam’s Death Too Much, Sasha Relapses To Cope With Grief?