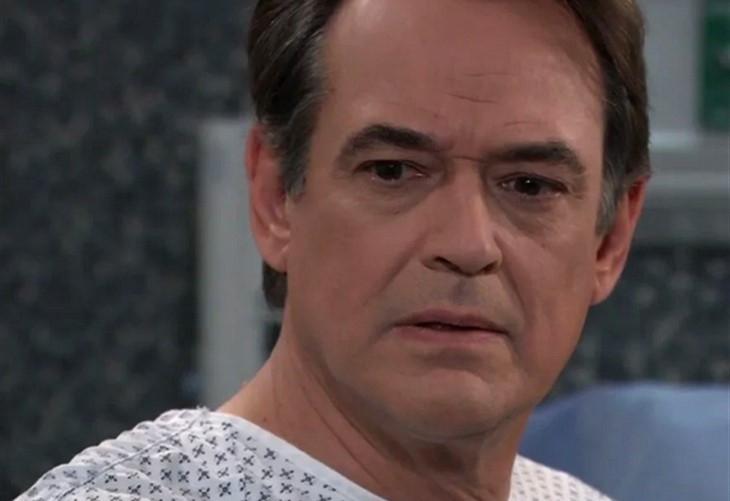 General Hospital (GH) spoilers and rumors tease that Peter August (Wes Ramsey) will have some permanent damage from the toxin he ingested and wind up in Spring Ridge, where Ryan(Jon Lindstrom) is now in future episodes of General Hospital. But fans shouldn’t expect someone who didn’t stay “dead” in a morgue freezer to be down for long!

General Hospital viewers will remember that Dr. Hamilton Finn (Michael Easton) and Nurse Elizabeth Baldwin (Rebecca Herbst) had pronounced Peter dead as a doornail before they finally figured out where to hide his body! General Hospital viewers will recall that Finn had pushed Peter down a flight of stairs in a fit of rage, after Peter had thrown the very last dose of antidote for a toxin Peter meant to dose Finn with off the roof! Detective Harrison Chase (Josh Swickard) nearly died, and had a very long recovery once Finn figured out a way to get an antidote into him by a sort of backdoor method, and hit had worked. It was the antidote for a toxin used on Sean Donely (John C. Reilly) by Peter’s father, Cesar Faison (Anders Hove) years ago. It seems poetic justice that Peter is the victim of a poison, and an unidentifiable one at that – at least not one of the normal poisons physicians deal with! Just like Peter did to Chase! It appears that this toxin has caused some permanent damage to Peter and he is paralyzed – however, he had appeared dead as well and apparently wasn’t!

General Hospital viewers will recall that Peter was running “The Invader” when he had Lulu Spencer, (Emme Rylan) then Lulu Falconeri, write a story about the twenty-fifth anniversary of the Ryan Chamberlain serial killings! Peter was still her boss when Ryan stabbed her in the stomach, and was around when he was apprehended!! So, Peter knew that Ryan was alive. There is a very good possibility he’s always known, but back then Peter was trying to look squeaky clean to everyone.

General Hospital viewers will recall that Ryan was revealed to have been in the DVX for many years, and they were the ones who saved him from the funhouse fire. Guess who else was in the DVX for many years, some of those overlapping with Ryan’s? Faison, Peter’s father! Neither Peter nor Ryan would have given anyone any inkling they knew each other when Ryan was impersonating Kevin Collins (Jon Lindstrom) this last time – but obviously, both were hiding their true selves at the time. Peter reacquaints himself with Ryan once in Spring Ridge.

General Hospital viewers will recall that there were signs that Ryan is faking – and just waiting for the right time to strike again. He is a little handicapped with only one hand but not very much, as shown by his abilities to tie up people and to kill while on the run in Canada! General Hospital viewers will recall that smirk on his face when he was rolled out of General Hospital – he was able to fake no reaction when Ava Cassadine (Maura West) pinched him so hard she nearly drew blood! But then Peter could easily be faking too – maybe not his initial paralysis, but if he comes out of it it’s the perfect way to hide in plain sight – like Ryan is!

Unfortunately Peter wouldn’t be able to fake the CT scans –unless he had a helper in General Hospital who faked those, too, so he wouldn’t be staying in Pentonville! Now that Ryan and Peter are both In Spring Ridge and thought to no longer be dangerous, it would be the perfect time to team up and slip out unnoticed and then back into the facility with no one being the wiser, and take care of the evil business that was left unfinished upon their captures!