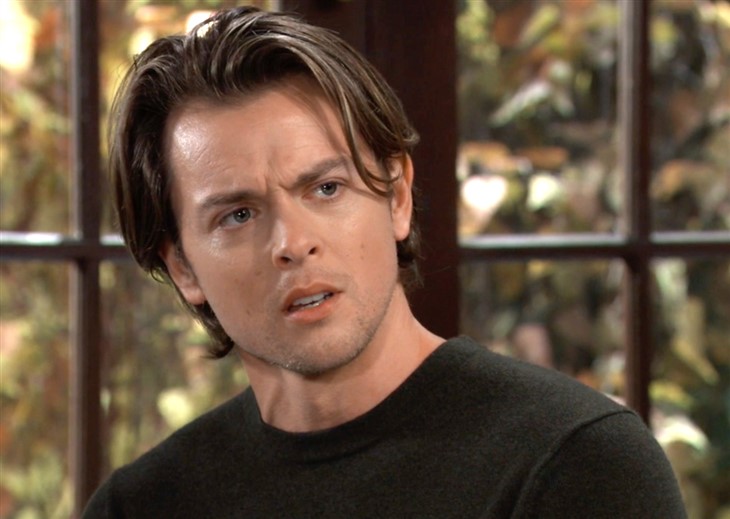 General Hospital (GH) spoilers for Wednesday, December 15, 2021, reveal Michael getting the shock of his life learning his angry pleas didn’t work with the parole board. Little does he know what did work — on Brad’s behalf.

General Hospital Spoilers – Should Brad Cooper Watch His Back? Or Should Michael Corinthos?

Michael Corinthos (Chad Duell) thinks he is home free from ever seeing Brad Cooper (Parry Shen) again but that was not to be. Of course, Brad gets out, heads straight for the Metro Court (like everyone else after being released from prison), and runs smack dab into Michael. As we know, vengeful Michael is less than pleased.

Brad tries to make amends after everything that happened with Wiley, but Michael tells him he doesn’t get second chances. Britt Westbourne (Kelly Thiebaud) is also there at the restaurant, but Mrs. Wu (Lydia Look) warns her against getting too close to her nephew even if they are BFFs.

Elizabeth Webber (Rebecca Herbst) and Hamilton Finn (Michael Easton) finally shared a kiss and now both of them are confused. Liz takes her woes to Terry Randolph (Cassandra James) and Portia Robinson (Brook Kerr) wonders if she should be getting close to Finn while she is still grieving Franco Baldwin (Roger Howarth). We say maybe she should have a proper mourning period.

Meanwhile, Finn takes his troubles to his brother, Harrison Chase (Josh Swickard), while they are in the steam room after a workout. Chase tells Finn to stop looking for things that aren’t there. Is he talking about Elizabeth or his own life with Brook Lynn (Amanda Setton) and the lies they are telling?

The Davis girls get together on Wednesday as Alexis Davis (Nancy Lee Grahn) has her daughters around. Even Kristina Corinthos (Lexi Ainsworth) is there to tell her mother she needs to start her life anew and stop sitting around feeling sorry for herself.

Willow Tait (Katelyn MacMullen) and Olivia Quartermaine (Lisa LoCicero) spend some girl time together shopping and that’s when they run into Brook Lynn. As Willow turns on her inner snob (which she does often), Brook Lynn rightfully tells her she has no place to judge. Stay tuned to General Hospital weekdays to see how these stories play out.