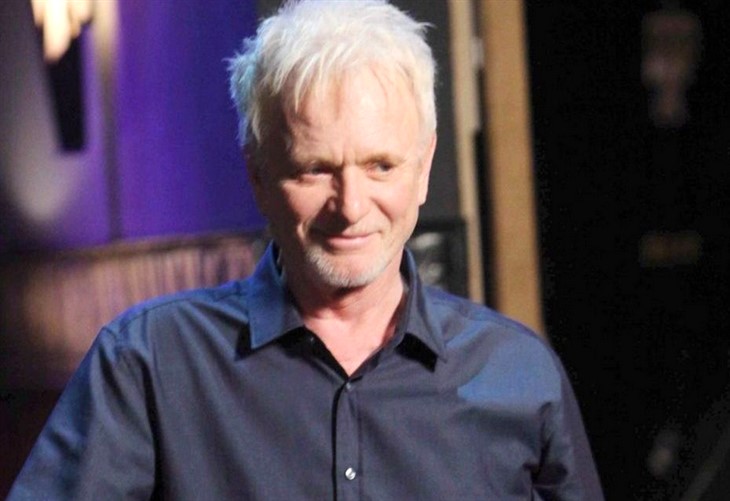 Anthony Geary will always hold a place in General Hospital fans’ hearts for creating the role of Luke Spencer. And Anthony did more than originate that beloved General Hospital character. The actor turned Luke into one of the ABC soap opera’s most memorable figures.

After making history by taking home eight Daytime Emmy Awards for Outstanding Lead Actor in a Drama Series, Geary retired. So where is Anthony Geary now? Find out what the actor has done in recent years below, from Amsterdam to a music video (you can even watch it!), plus how he began on General Hospital and his final appearance.

When Did Anthony Geary Begin And End General Hospital Role?

In 1978, General Hospital producers tapped Anthony Geary to star as Luke Spencer for a short (13 weeks) story line. But as Geary developed his character, fans fell in love with Luke. And so did Laura Webber (Genie Francis).

In 1984, Geary left General Hospital for film, TV, and theater roles. For instance, Anthony got cast in “Weird Al” Yankovic’s film debut as a scientist named Philo. But opportunities didn’t prove as numerous as the actor had hoped.

Looking to return to General Hospital in a different role, Geary eventually portrayed Luke’s mirror image cousin, Bill Eckert, in 1991. Fans didn’t react favorably, though. As a result, Anthony returned to his role as Luke in 1993.

But in 2015, Anthony ended his reign on General Hospital for the last time. He made one exception, though. Geary appeared in a cameo in 2017 for his co-star Jane Elliot’s retirement.

In the wake of his General Hospital exit, Anthony Geary traveled to Amsterdam for a new life, per Soaps. And Geary shared that he has never felt happier than in the Netherlands.

“Every day is an adventure,” stated the General Hospital alum. “Amsterdam is a city of amazing qualities: cobblestone streets designed 400 years ago for walking and cycling, tree-lined canals and quirky historical buildings, people from all over the world wishing you a good morning in every conceivable language… I love it here.”

From the lifestyle to the art and culture, Anthony feels daily gratitude “to live in this amazing city,” he shared. And his boat has helped him appreciate the region. A favorite boat voyage involves traveling down the Amstel River from Amsterdam to a small village called Oude Kerk Aan Amstel (Old Church On The Amstel).

“Cruising the river to Oude Kerk on a sunny afternoon is one of the great pleasures of living here,” gushed Geary. The actor loves the historic inn in the village, which was constructed “300 years ago for the king’s hunting parties,” he added. “The inn still operates and is my favorite place for lunch on these river trips.” 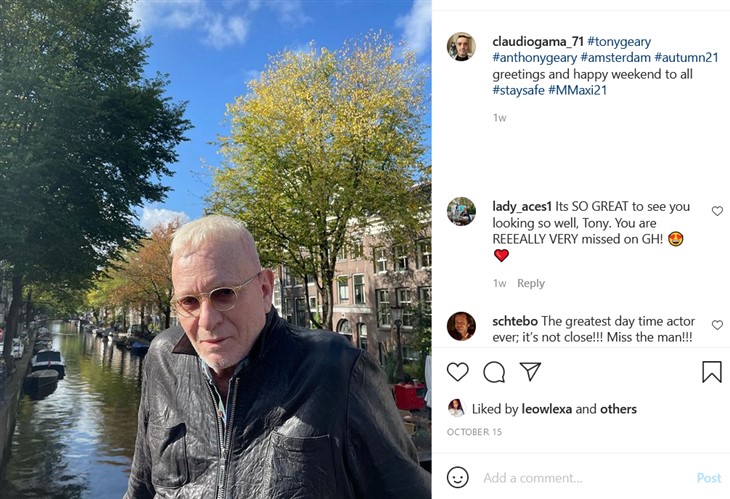 But the General Hospital alum hasn’t totally vanished from the entertainment world. Most recently, Anthony Geary starred in a video for Jim Warren’s song, “I Love Amsterdam,” reported Soap Opera Digest. The GH alum even provided back-up vocals for the music video.

Looking at how and why he starred in Warren’s video, Geary admitted that he “certainly was not surprised to find Amsterdam had moved [Jim] to take pen to page. This city has inspired artists, philosophers, engineers, writers, photographers, lovers, sailors and whores for a thousand years.”

And the actor also shared that he “loved” the lyrics and tune. Although Anthony no longer feels lured to appear on camera, he did “find it gratifying to be asked.” He also appreciated performing his part in the music video from his living room “overlooking one of the sweetest canals in the city, so what’s not to enjoy? The song does present a side of my hometown that through lyrics, attitude and video is familiar and iconic — I love Amsterdam.”

Watch the video below!

But while Anthony loves Amsterdam, General Hospital fans still miss him and hope one day to see him return! What do you think? Do you wish Anthony Geary would return to GH? Share your views with us. And be sure to check back on our site for all the news about General Hospital.