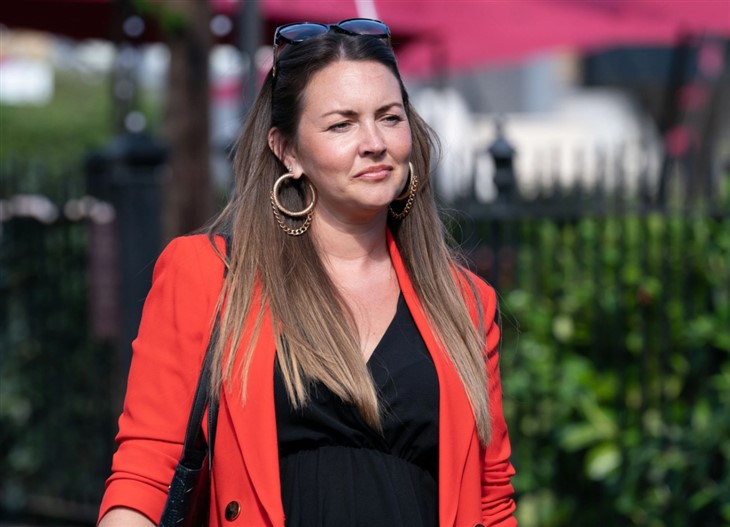 EastEnders Spoilers hint that Stacey Slater (Lacey Turner) will be returning to Walford in upcoming episodes. Stacey has returned to our tv screen recently since she was falsely charged with assaulting Ruby Allen (Louisa Lytton). As viewers know, Ruby Allen lied about Stacey being the cause of her miscarriage.

This caused Stacey to be charged for assaulting Ruby. Since then, Stacey has not made an appearance on EastEnders until recently. This is until Ruby told Jean Slater (Gillian Wright) that she lied about everything she said about Stacey. Then to cover her tracks and keep her secrets, she reported Jean to the police for selling drugs.

This led to Martin learning the truth about Ruby keeping secrets from him including Stacey. He would then go visit Stacey in prison and fill her in on everything that he learned. Which would upset Stacey as not only did Ruby target her but also Jean. This would be the first time viewers would see Stacey.

Another time would be when Stacey was visited by Jean after Jean was released for flipping things and blaming Ruby for everything that happened. Since then, news of Stacey returning to the square has been hinted at but soon she will be coming back to the square to live after her release from prison. With her return, she will have some news that she will bring along with her.

Stacey will be making her return next week to EastEnders and will be bringing some surprising news for her estranged husband, Martin Fowler (James Bye). It seems that Martin will start to realize that he still has feelings for Stacey. He will confide in his newly found friend, Zack Hudson (James Farrar), who will go on to encourage him to tell Stacey about how he is feeling. Martin will agree and decide to be honest about his feeling for Stacey but right as he is about to Stacey begins to announce some news of her own.

What might be the news and will it affect Martin’s plans on telling Stacey how he really feels about her? Stacey is also set to catch up with her prison friend, Eve (Heather Peace), who will show up in Walford not long after her. Eve is going to appear in the Square looking for Stacey who will be in the Vic. Jean has been revealed to take an instant dislike towards Eve.  Keep checking Soap Opera Spy for more EastEnders spoilers, news and updates